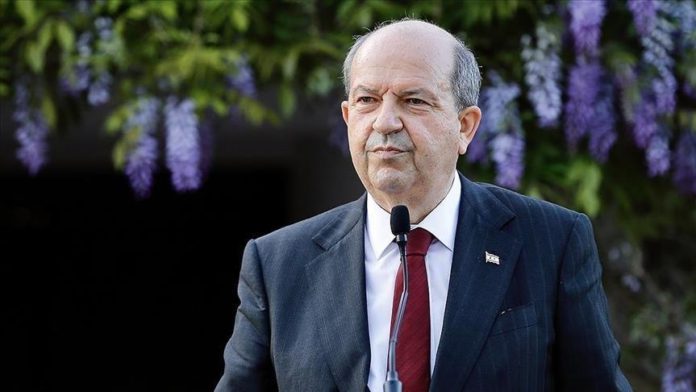 Official negotiations on the Cyprus issue can start only after the recognition of the sovereign equality of the Turkish side, the Turkish Cypriot president said Saturday.

Ersin Tatar said he reiterated the necessity of acceptance of equal international status during a meeting with UN Secretary-General Antonio Guterres.

Tatar told reporters following his return from Brussels that he had a “beneficial” and “sincere” meeting with Guterres.

He said Guterres will evaluate if there will be a second 5+1 meeting in Geneva after meetings in New York in September.

“It is out of the question for us to go directly to official negotiations,” he added.

The unofficial first 5+1 meeting — with both sides of the island, guarantor countries Turkey, Greece and the UK, and the UN – was held in Geneva from April 27 – 29 but no common ground was found to begin the negotiations process.

Guterres suggested that the process “could be accelerated and handled more seriously” with the appointment of a special representative for the process, said Tatar, adding his country will consider the suggestion.

The island of Cyprus has been divided since 1974 when a Greek Cypriot coup aimed at Greece’s annexation of the island was followed by violence against the island’s Turks and Ankara’s intervention as a guarantor power.

It has seen an on-and-off peace process in recent years, including a failed 2017 initiative in Switzerland under the auspices of the guarantor countries.