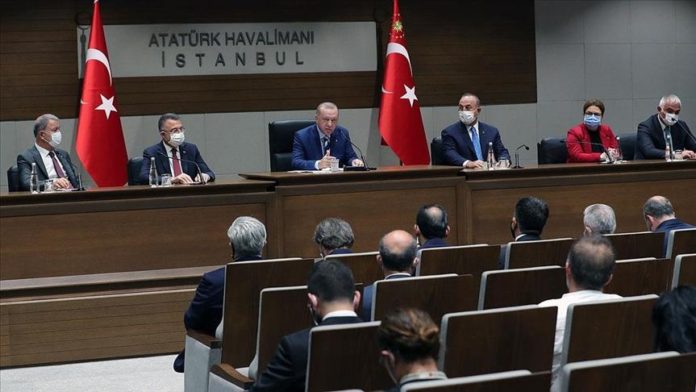 The Turkish president on Monday reiterated his call to all parties who desire a just, lasting and sustainable future in Cyprus to seize the historic opportunity.

“Turkish Cypriots have been fighting for equality and justice on the island for more than half a century,” Recep Tayyip Erdogan told a news conference ahead of his official visit to the Turkish Republic of Northern Cyprus (TRNC).

“The Turkish Cypriot side has once again shown to the world who is in favor of solution and who is profiting from the deadlock,” Erdogan said.

He said that any new negotiation process on Cyprus can only be held between two equal and sovereign states.

The Turkish president has embarked on a two-day official visit to TRNC.

During his visit, Erdogan will address a special session of the Turkish Cypriot parliament and attend celebrations of July 20 Peace and Freedom Day, marking the 47th anniversary of Turkey’s 1974 Peace Operation, which protected the island’s Turkish Cypriot community from Greek Cypriot violence.

He will also meet with Turkish Cypriot President Ersin Tatar to exchange views on the latest developments in the Eastern Mediterranean and bilateral relations.

Erdogan will also attend a mass inauguration ceremony of some completed projects.

Criticizing a recent decision by a top EU court which allows the banning of headscarves under certain conditions, Erdogan said: “They must first learn what freedom of belief is.”

The Court of Justice of the EU on Thursday ruled on two cases brought by Muslim women in Germany who were suspended from their jobs for wearing headscarves.

On the first visit by an Azerbaijani parliamentary delegation to Northern Cyprus, Erdogan said establishing such high-level contacts between countries and the TRNC is a result of “our efforts”.

A delegation of the foreign affairs and inter-parliamentary relations committee of Azerbaijan’s parliament visited the TRNC on Friday.

Books more mesmerizing than ever during quarantine