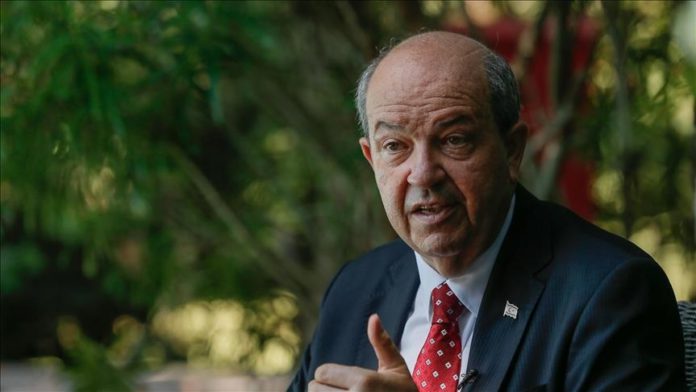 Turkish Cypriots are in favor of “the new policy”, a two-state solution, on Cyprus as decades of negotiations for a federation failed to resolve the Cyprus issue, said the president of the Turkish Republic of Northern Cyprus (TRNC).

Speaking to Anadolu Agency on the sidelines of this weekend’s Antalya Diplomacy Forum in Mediterranean Turkey, Ersin Tatar said the goal of the recent informal talks in Geneva in April was to determine whether there is a common ground between the parties.

For decades, the parties negotiated for a federal solution but these talks could not come to a conclusion, and this is no longer the case, said Tatar.

“Now we are defending the new policy (two-state solution) on Cyprus. I based my presidential mandate on this. We said that we want to take this process with a new vision on Cyprus, and that there cannot be a federation-based agreement,” he said.

“So far, almost all of the comprehensive negotiation proposals, including the UN’s, have been approved by the Turkish side, and the Greek side has rejected them all. Because the Greek side has never wanted a partnership with us on that basis (federation), and they wanted to share neither wealth nor administration with the Turks,” Tatar added.

The Greek Cypriots’ aim was to make Cyprus a Greek-Hellenic island, and it still is, and they make no effort to hide it, Tatar said.

“Now, with the support of Turkey, we are talking about two separate sovereign equality-based independent states living side by side on Cyprus. Only if this is the case can there be a comprehensive and permanent solution,” he added.

Noting that he will receive UN Cyprus envoy Jane Holl Lute next Monday, Tatar said that they will discuss whether there is a common ground between the parties after the Geneva talks.

Tatar said he will once again reiterate the TRNC’s position of sovereign equality and a two-state solution as preconditions for Turkish Cypriots to enter formal negotiations.

Turkey is a strong country both around the world and in its region said Tatar adding it is important that Turkey supports a two-state solution.

On Turkish-EU relations, Tatar said that Greek Cypriots are trying to disrupt relations between Turkey on the one hand and Greece and the EU on the other.

He said, this shows how poor of an idea to accept Greek Cypriots to the EU membership before a resolution on Cyprus issue.

It would be appropriate to differentiate Cyprus issue from other issues when it comes to EU-Turkey relations and agreements, he added.

The island of Cyprus has been divided since 1964, when ethnic attacks forced Turkish Cypriots to withdraw into enclaves for their safety. In 1974, a Greek Cypriot coup aiming at Greece’s annexation led to Turkey’s military intervention as a guarantor power.

The Greek Cypriot administration, backed by Greece, became a member of the European Union in 2004, although in a referendum that year most Greek Cypriots rejected a UN settlement plan which envisaged a reunited Cyprus joining the EU.

23 irregular migrants rounded up in Turkey