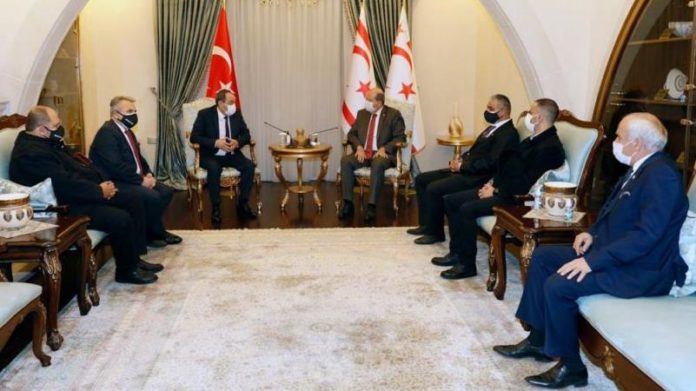 Ersin Tatar said he was pleased to receive the delegation in “this meaningful visit,” said a statement by the Presidency of the Turkish Republic of Northern Cyprus (TRNC).

Tatar said the TRNC has always been close to the “motherland” Turkiye and that he is glad to see recent rapprochement with Turkic states as well as Azerbaijan’s victory in Karabakh.

The TRNC has fought for its own struggle in the Eastern Mediterranean and won its freedom, Tatar said, adding: “We are pleased that our relations with our Azerbaijani brothers and sisters have gone further and that social and cultural contacts have increased.”

“Azerbaijan shows great interest to us. I interview many journalists and participate in television shows. We are a nation of the same lineage, states that share the same culture, have a common destiny, and stand by each other in all kinds of struggles,” Tatar noted.

“There is a Republic of Turkiye, which we all respect. There are various, diverse and strong ties that bind us together. The Azerbaijani people are our brothers. What goes through my heart is the increase in political ties at the highest level in a short time,” he added.

In 1974, a Greek Cypriot coup aimed at Greece’s annexation led to Turkiye’s military intervention as a guarantor power to protect Turkish Cypriots from persecution and violence. As a result, the TRNC was founded in 1983.

It has seen an on-and-off peace process in recent years, including a failed 2017 initiative in Switzerland under the auspices of guarantor countries Turkiye, Greece, and the UK.