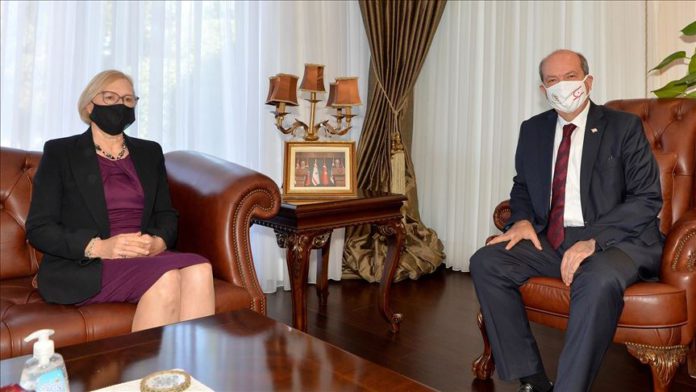 Turkish Cypriot President Ersin Tatar on Thursday met with the head of the UN peacekeeping force in Cyprus.

Tatar briefed Elizabeth Spehar and her delegation on their new approach and policy to achieve reconciliation on the island.

Noting that failed talks are now a thing of the past, he said a possible compromise should be sought on the grounds of sovereign equality and co-existence.

Tatar said Turkish Cypriots were sidelined by the international community for years and they only had Turkey backing them.

He called the reopening of the ghost town of Maras after 46 years a game-changer.

Tatar said the properties of the region will be returned to their real owners through the Immovable Property Commission in the Turkish Republic of Northern Cyprus, which is also recognized by the European Court of Human Rights.

For her part, Spehar said there is a serious lack of trust between both parties on the island and it is necessary to initiate confidence-building measures.

The two sides also exchanged views on the upcoming visit of Jane Holl Lute, a temporary special advisor to the UN chief, as well as the 5+ UN format meeting where all stakeholders will come together.