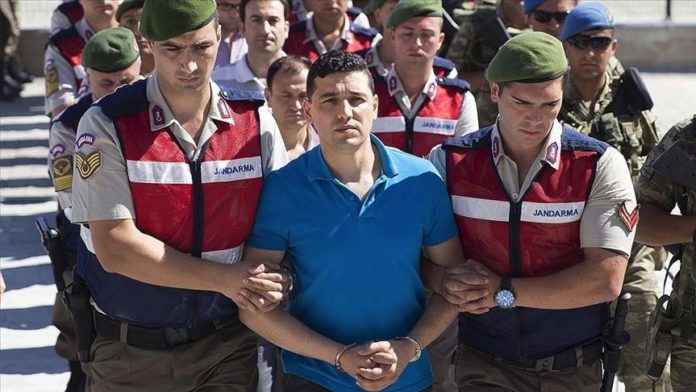 A Turkish court on Monday delivered its reasoned decision on the case of the Akinci Air Base, which was used as a command center during the 2016 defeated coup bid in the country by the Fetullah Terrorist Organization (FETO).

FETO aimed to change the constitutional order in Turkey and create a non-national, illegitimate government in accordance with its ideology, said the decision by Heavy Penal Court no. 4 in the capital Ankara.

According to the decision, the coup attempt was carried out on the instruction of the civilian imams at the Akinci Air Base, who were in real-time communication with US-based ringleader Fetullah Gulen and the so-called top administrators at his side.

Kemal Batmaz, one of those civilians, led the elements in the Air Force during the coup attempt, as did Nurettin Oruc in the Gendarme, Hakan Cicek in the Navy, and Adil Oksuz in the Turkish Armed Forces, the decision read.

A total of 77 civilian/public officials were killed and 206 were injured in the bombings carried out by planes that took off from Akinci, the decision added.

The court ruled on 475 defendants standing trial over these incidents.

Last November, a Turkish court slapped several military officers and civilians who helped plot and carry out the deadly coup attempt on July 15, 2016, each with dozens of aggravated life sentences.

In the trial on the role of officers at the Akinci, the court in Ankara handed 79 aggravated life sentences to former pilot lieutenant colonel Hasan Husnu Balikci, who bombed Turkey’s parliament.

At Akinci, situated north of the capital, the coup plotters established a command center to coordinate attacks, including by fighter jets that bombed parliament and the presidential complex. The base was later renamed Murted Base.

Some of the most senior plotters are said to have been at the base, and it was also where then-Chief of General Staff Gen. Hulusi Akar was held hostage.