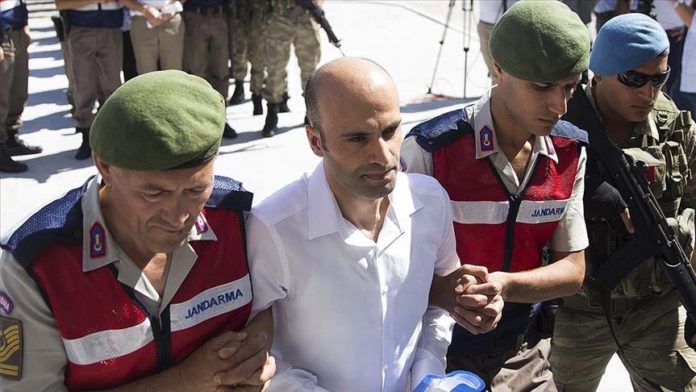 The court handed down 79 aggravated life sentences to former Air Force Capt. Ahmet Tosun for attempting to topple the constitutional order, attempting to assassinate the president and martyring 77 people.

Separately, 1,511 defendants were given prison terms ranging from 14 months to 20 years, while others were acquitted in nationwide cases.

Cases are still ongoing in Ankara, Istanbul and seven other provinces.

Tosun, along with former commander Akinci Airbase, went to the 8th Air Force Base in southeast province Diyarbakir where they supervised the installation of Sniper targeting pods for F-16s fighter jets, which would take part in the coup attempt, according to court documents.

He also ordered the pursuit of President Recep Tayyip Erdogan’s plane and a low-altitude flyover above the Presidential Palace and General Staff headquarters.

Tosun was caught while trying to escape after the coup attempt was defeated and confessed his role and expressed regret while being interrogated by prosecutors.

“Commanding officer Ahmet Ozcetin asked me to transmit his orders to pilots flying that night. Accordingly, I ordered the attacks on the building of the Turkish Parliament and special police forces and police aviation department. I now regret that I didn’t resist that night and got involved in the coup attempt,” he said.

During trials that began Sept. 8, 2017, however, he denied his confessions and testimonies and claimed he knew nothing about the coup attempt.

“I was deceived that there was a counter-terror operation. I denounce FETO terrorist organization. As a Kemalist and secular officer, it is impossible for me to be a member of such an organization,” he said.

But Oct. 16, 2020 he rejected recorded radio communication that revealed his participation in the coup attempt.