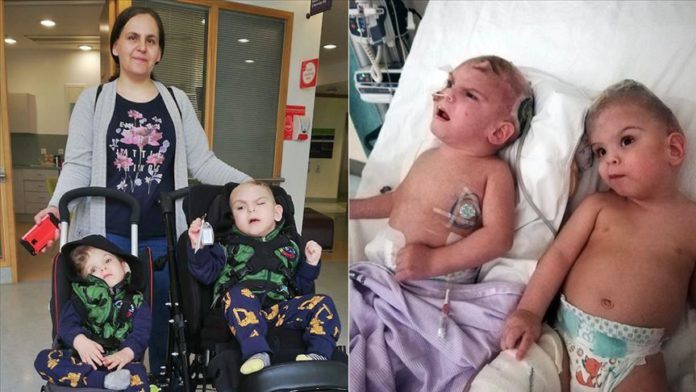 Turkish conjoined twin brothers Yigit and Derman will set off on their journey back to Turkey after more than six months of medical operations and healing in the British capital London to separate them.

The two-year-old twins, who were born with their heads joined to each other, will be taken back to Turkey early on Wednesday in an ambulance plane sent by the Turkish Health Ministry.

Speaking to Anadolu Agency before leaving for Turkey, Omer Evrensel said: “This operation could not be done in Turkey […] President Erdogan and his wife Emine Erdogan helped us to come here.”

He said the first lady first visited them when they were in Istanbul in search of a hospital that could perform the procedure and “showed great care on our children’s condition.”

“Then we were brought to London” with special orders from the presidency when the London hospital and surgeons agreed to the operation.

Evrensel said the operation was performed by Noor Ul Owase Jeelani, a pediatric neurosurgeon of Kashmiri background and craniofacial surgeon David Dunaway in one of Britain’s largest children’s hospitals.

“We are happy to be able to go back to Turkey with healthy children,” said father Evrensel.

He said they, as the boys’ parents, had never fallen into despair and that God helped them.

Evrensel recounted that they had been asked to abort the pregnancy before the birth once the twins’ condition became clear but “we never agreed to that as they were given to us by Allah.”

“We were ready to live with that condition, but Allah showed us a path, gave us a remedy — we are thankful.”

Yigit and Derman were born on June 21, 2018, and will celebrate their second birthday later this month.

Zimbabwe: Soldiers shut down Harare ahead of protests