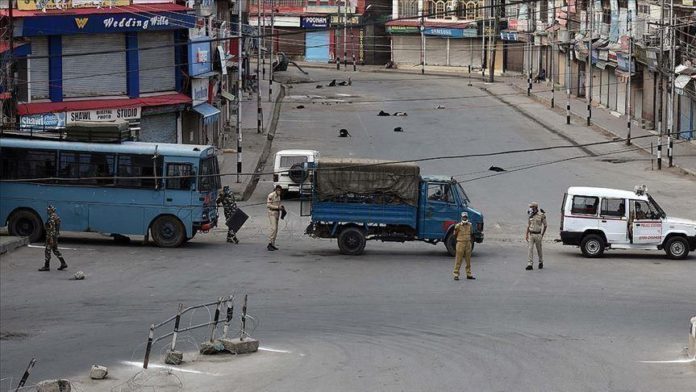 A Turkish composer known for several other works on such international issues as Jerusalem hopes to give voice to the plight of Kashmir with a new song he released Kashmir Solidarity Day.

Turgay Evren added the song, I am Kashmir, which he composed for the region’s day of remembrance on Feb. 5, to his repertoire of other works including The world is bigger than five, Don’t cry Jerusalem and Erdogan a tall man.

Introducing his new song to his audience via Twitter and YouTube, Evren said he had received many messages of thanks and prayers from Kashmiris after releasing an earlier song, Kashmir is my name, in June 2020. The song had been vocalized by Della Miles.

“The song made many people hear the pain of Indian-occupied Kashmir,” said Evren, noting that he had managed to touch the hearts of millions.

“The Indian government abolished the special status of Kashmir and imposed a curfew on the Kashmiri people, sending in more than 800,000 troops. The global epidemic has extended the period of isolation experienced by the Kashmiri people. Meanwhile, things got worse for people in Kashmir from all sides,” he added.

After these events, Evren said he learned a lot about the troubles faced by Kashmiris and decided to write songs to raise awareness around the world.

He also composed Permanent spring (Daimi Bahar), in Turkish, Urdu and Kashmiri in honor of the July 13 Kashmir Martyrs Day, as well as the July 15, 2016 attempted coup in Turkey.

“The other song, We will never betray, was also in Arabic and was dedicated to Palestine and Kashmir. Both songs reached hundreds, thousands of people all over the world. I am happy that all three songs we released were shared and appreciated by the president of Pakistan, Arif Alvi,” Evren said.

“I know a lot about Kashmir now. Air guns and young people who are blind, half-widows who have not heard from their husbands and wives for decades, fake conflicts that meant the lives of innocent people.

“I was inspired to once again show the suffering of my Kashmiri sisters and brothers with my lyrics. It was my duty as a human being and as a brother from Turkey,” he added.

Evren also expressed gratitude to Los Angeles-based musician Ali Tolga Demirtas, with whom he collaborated on I am Kashmir. He said Demirtas is “the hero behind all my human-based songs and the architect of our success in the music industry.”

“Muhammed Ekrem Kahraman, a musician who grew up in Switzerland, also gave his voice to this beautiful song. The songs I had written before were sung by Ekrem and played in his own international programs. He sang this song not only with his voice, but also with his heart.”

The song has over 108,000 views on Twitter so far, and has been retweeted by several official accounts in Pakistan.

Some Kashmiri groups in the Indian-administered Jammu and Kashmir have been fighting against the Indian rule for independence, or unification with neighboring Pakistan.