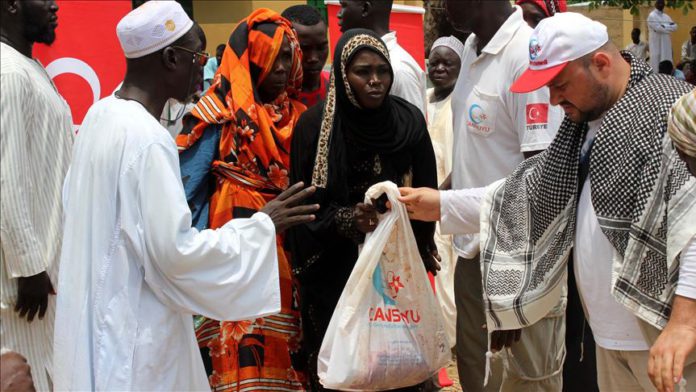 A Turkish charity group will sacrifice more than 30,000 animals across 27 countries during the major Muslim holiday of Eid al-Adha.

Despite difficulties in overseas travel due to the coronavirus pandemic, the Istanbul-based Cansuyu Charity and Solidarity Organization plans to reach over 1.5 million people in dozens of countries to share the joy of the holiday, Mustafa Koylu, the group’s head, told Anadolu Agency.

Most Muslim-majority countries around the world, including Turkey, will observe the four-day holiday starting on Friday.

The holiday commemorates the willingness of the Prophet Ibrahim, or Abraham, to sacrifice his son at the command of God, before the last-minute divine substitute of a ram.

Muslims sacrifice animals in commemoration of this intervention and share the meat with the poor and their relatives.

With this year’s aid campaign, Cansuyu is prioritizing the most needy countries and regions, including Yemen, Myanmar’s Rakhine state, the Bangsamoro Autonomous Region in Muslim Mindanao, the Philippines, and Palestine, Koylu said.

Turning to Africa, he added: “This year our teams from Turkey will be in Mauritania, Chad, Cameroon, Niger, Benin, Mali, Tanzania, Guinea, Senegal, Zimbabwe, and Zambia.”

In the countries of Burundi, Somalia, Kenya, South Sudan, Burkina Faso, Togo, Ivory Coast, and Yemen, as well as the Gaza Strip and the Bangsamoro Autonomous Region, mass animal slaughtering will be done through partners, he said, adding that Cansuyu also has teams in Asia and Mongolia.

Additionally, he underscored the rise in donations for Eid al-Fitr, another Muslim festival celebrated this May following a month of fasting, and Eid al-Adha compared to previous years.

“We expect that donations will grow more for Eid al-Adha. This year, people are more concerned due to the virus. There are official virus restrictions and measures and the short holiday of Eid al-Adha, which makes it difficult for people to slaughter animals. That’s why people are more willing to donate compared to years past.”

Muslim festival under shadow of COVID-19

Countries around the world are implementing measures and lockdowns to stem the virus’ spread. Some countries have also halted international flights.

“Due to coronavirus-related lockdowns, we got very high demand for food aid during the Muslim holy month of Ramadan and delivered food packages to 100,000 families,” Koylu said.

This year, Cansuyu started its aid campaign early to be able to meet the demand, he underlined.

“Normally, every year, we send our staff to countries to organize and monitor slaughtering and distributing. But this year, our staff aren’t allowed in some countries due to coronavirus restrictions,” he said.

To avoid any difficulties in countries that have implemented quarantine rules, the charity sent its teams to these countries early to stay in quarantine for 14 days before the start of Eid al-Adha.

After the end of quarantine, they will be able to carry out Eid work in time, he said, adding: “One of our teams is in quarantine in Niger and will complete a 14-day quarantine period before Friday.”

“Our hope is that human suffering in the world will have ended by the next Muslim holidays,” he said.