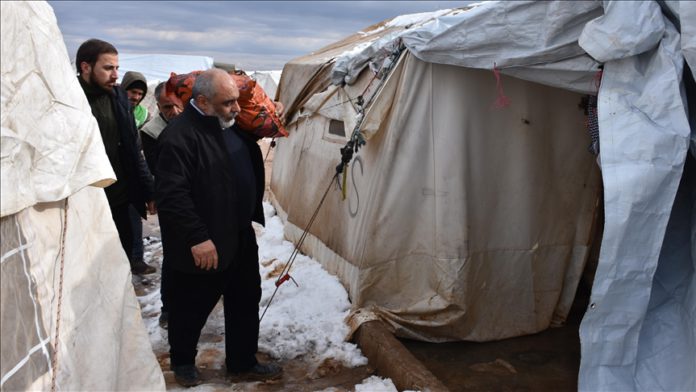 A Turkish humanitarian organization has urged the international community to provide immediate humanitarian assistance for Syrian refugees who are unable to withstand the weight of snow and rain.

The recent snow and rain have devastated hundreds of Syrian refugee camps along the Turkish border.

Bulent Yildirim, head of the Foundation for Human Rights and Freedoms and Humanitarian Relief (IHH), told Anadolu Agency that winter conditions are becoming more difficult and heavy snowfall has destroyed many tents.

“Many tents, including those in this tent city, were destroyed. People who live here have taken shelter with those who live in other camps,” he said.

Each tent currently houses 10-15 people, he stated: “The population has increased even more as a result of those who left the destroyed tents.

“We do our best, but it is not enough,” he said of the organization’s humanitarian efforts in the camps. “The weather is really cold.”

Yildirim said they will support refugees living in difficult conditions in the region.

“We want our people to make an effort, and non-governmental organizations to become more involved. Tents, winter jackets, clothing, food, beds, quilts, and firewood are all required for these people.”

He invited donors from Turkiye and around the world to help those in dire need.

Many tents at refugee camps in northern Syria’s opposition-held Afrin and Azez districts were unable to withstand the weight of the snowfall, forcing some residents and refugees to flee despite local highways being blocked.

After the recent snowfall, the Azez, al-Bab and Afrin regions, which have already been purged of terrorists by Turkish forces and their local allies, have become a chilling white.

Since 2016, Turkiye has launched a trio of successful anti-terror operations across its border in northern Syria to prevent the formation of a terror corridor and enable the peaceful settlement of residents: Euphrates Shield (2016), Olive Branch (2018) and Peace Spring (2019).