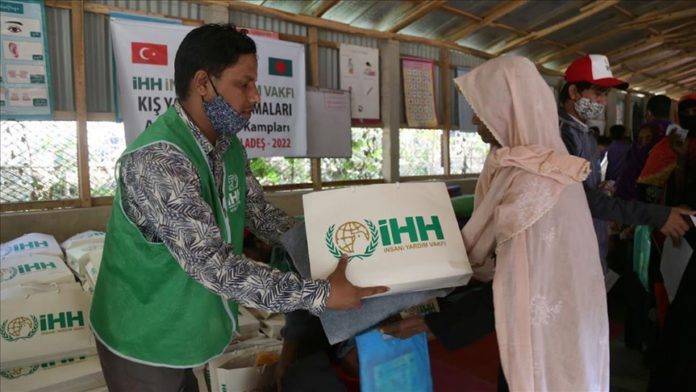 In a written statement on Friday, the Humanitarian Relief Foundation (IHH) said it provided medical check-ups for 105 people, and offered relevant services to residents of the region who needed urgent treatment.

Also, blankets, mats, and clothes were delivered to 488 families, the statement said.

A deadly fire that ripped through the crammed Camp 16 in the Cox’s Bazar district on Sunday reduced hundreds of makeshift tents, education centers, Islamic seminaries, and mosques, officials said.

Some 1,200 bamboo shelters burned down on Sunday, while hundreds of people were slightly injured and thousands of people lost their homes in the fire, according to the IHH.

Bangladesh is currently hosting over 1.1 million Rohingya in refugee camps in Cox’s Bazar who have fled a brutal military crackdown in neighboring Myanmar’s Rakhine State since August 2017.

Earlier this month, the camp’s COVID-19 isolation center was severely damaged in a fire. No casualties were reported and all patients under treatment, including those under isolation, were safely evacuated.

In July last year, more than 60 makeshift tents in the world’s largest refugee settlements had also been gutted in a fire.

The persecuted people, however, faced the deadliest fire in one of their camps on March 22 last year, with at least 15 members of the community killed and more than 10,000 Rohingya structures and tents completely destroyed, including a large camp-based Turkish Field Hospital.

Another fire killed three people – all Rohingya – and damaged seven shops in the camp’s market on April 2 last year.

In mid-January 2021, another deadly fire destroyed more than 500 Rohingya shanties. Dozens of other minor fires also took place in the congested Rohingya camps over the last couple of years.