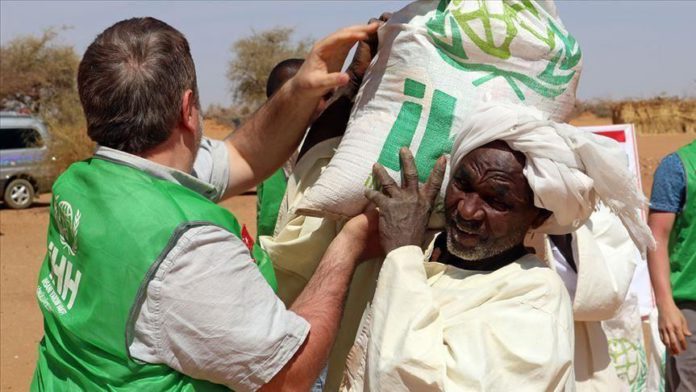 A Turkish charity wants to distribute aid to more than 2 million people in need around the globe during the Muslim holiday of Eid al-Adha, according to an official with the group.

Several Muslim-majority countries, including Turkey, will mark the first day of the four-day holiday, also known as the Feast of the Sacrifice, July 31.

“Normally, we carry out Eid al-Adha work in more than 100 countries. It was like this in previous years. Unfortunately, due to the pandemic, this year it is not possible to go to every country and carry out our [aid] work,” said Aydin.

The eid meat distribution focused mostly on those in refugee camps and war-torn and impoverished regions last year, including Syria, Myanmar’s Rakhine State, Yemen and Palestine.

He said IHH will head to countries where there is not a lot of pandemic-related restrictions.

“Also, through our partners and representatives, we will carry out our Eid al-Adha works in countries where we are not allowed to go,” he added.

The Istanbul-based agency has been actively working across the world for 28 years to distribute sacrificial meat to needy people.

There are countries which apply quarantine measures because of the coronavirus outbreak, and there are no international flights there during this period, he said.

Since first appearing in China last December, coronavirus has spread to at least 188 countries and regions. The US, Brazil, India, and Russia are currently the countries hardest hit in the world.

He said this year IHH has no such opportunity due to COVID-19 limitations, and would only send its own staff to distribute aid.

Compared to previous years, the group noticed a “big increase” in donations during Ramadan and donations for the sacrifice campaign are progressing in this uptrend.

“As a reason, we think that our nation has increased its support for charities based on the understanding of ‘small charity defeats much trouble,’” he said.

People are more sensitive about donations in this period, he said. “We think that it is because this year Hajj pilgrimage will be off-limits to most of the world’s Muslims, and the mass animal slaughter cannot be done in Turkey due to the threat of the coronavirus pandemic.”

The charity group targets the elderly, women, orphans and children as a priority in each campaign, Aydin said, adding it applies campaigns primarily in crisis regions.

“Again, this year, we are showing more sensitivity to campaigns both in Turkey and abroad, and determine especially the elderly and day laborers as our main priorities.”

In addition, IHH plans to give all orphan children in respective regions a festive gift, he said.

He said benefactors can donate and get an orphan gift for 150 Turkish liras ($22) and make orphans happy during the holidays.

Donations are distributed in line with the donors’ requests among countries covered in this year’s campaign while factoring in each country’s needs.

On the first day of Eid al-Adha, following eid prayers, animals are slaughtered according to Islamic rules.

After a meet and greet with local Muslims in various countries, meat is divided and distributed to the needy.

In 2019, IHH with the help of donors, delivered 51,447 sacrifice meat shares to 2.57 million needy people in 93 countries and regions during the Feast of the Sacrifice.

IHH has been working since 1992 with the purpose to deliver aid to people who are in need regardless of religion, language, race or sect, and to prevent violation of basic human rights and freedoms for people, according to group’s website.

US urges 'tangible reforms' in Lebanon under new gov’t