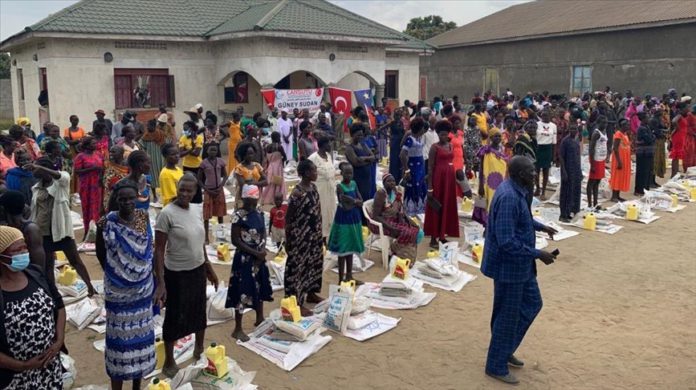 In a statement on Monday, the Istanbul-based Cansuyu Charity and Solidarity Organization said that approximately one million people are struggling to survive under difficult conditions due to the flood disaster caused by excessive rainfall in South Sudan, which is also battered by famine.

People in South Sudan have been living an isolated life in the region for months due to heavy rains that have continued since last October, the statement added.

Packages consisting of basic food items were delivered to South Sudan’s flood-affected regions in cooperation with the Turkish Embassy in Juba. The aid campaign was also supported by the Turkish Cooperation and Coordination Agency and the Turkish Maarif Foundation.

The statement cited Hasan Yasar, a board member responsible for the foreign affairs of Cansuyu, as saying that South Sudan has been going through a difficult period and the excessive rainfall in the region has been continuing for months.

Noting that nearly 100 people were killed due to floods, Yasar said: “The destruction and neediness in the country, which is going through a difficult process, is at an extreme level.”

Last month, three UN organizations called for immediate humanitarian access to parts of South Sudan’s Pibor county in Jonglei state, where people have run out of food and are facing catastrophic levels of hunger.

According to a new report by the Integrated Food Security Phase Classification, the UN’s Food and Agriculture Organization, UNICEF and the World Food Programme are scaling up their response, along with other humanitarian aid organizations.

The high levels of hunger are being driven by insecurity, the COVID-19 pandemic, the economic crisis, and the impact of flooding on livelihoods, the report noted.