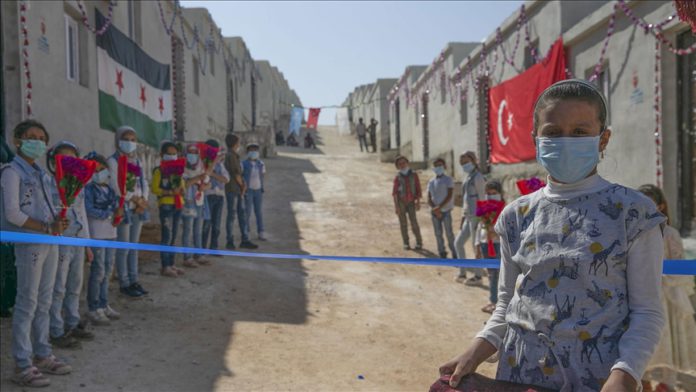 A charity run by Turkey’s top religious authority has delivered over 1,700 houses to war victims in Syria as part of an aid project.

The Turkiye Diyanet Foundation (TDV) has provided uninterrupted support to war victims in all areas, from supplying food, shelter to education in Syria since the beginning of the civil war, 2011, said a statement issued by the charity group.

As part of the One Goodness, A Warm Home Project, which was launched by TDV in January to provide a warm home and a more orderly life to families struggling to survive in tent cities, the TDV delivered 1,753 houses to Syrian families, the statement added.

Ihsan Acik, the second chairman of the board of trustees of the TDV, said the Turkish nation acts as a bridge to deliver aid to the oppressed and victims, it said.

Acik noted that as part of the project, they built 1,753 houses in Syria’s Idlib and Azez regions and delivered them to families thanks to the support of different non-governmental organizations from Turkey and abroad.

“We have also started the construction works of 1,000 goodness residences. We aim to complete 5,000 houses in the region and deliver them to families,” he said.

“Our residences, which are built on 30 square meters in size, 1 + 1 with kitchen, bathroom, and toilet are a sheltered from all kinds of bad weather conditions, offer a healthier life opportunity to our families,” he added.

He stressed that families forced to migrate due to the civil war did not have a place to live except in mosques and tents.

Over half of EU adults have received COVID-19 booster shots