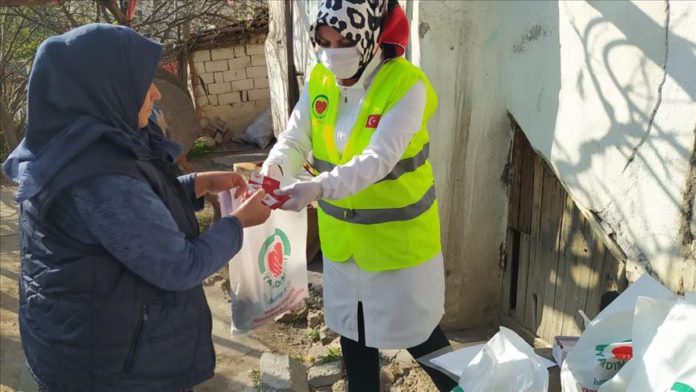 Turkey’s charity association allocated a total budget of 4 million Turkish liras (over $564,000) for aids in Muslim holy month of Ramadan at home and abroad amid pandemic, the head of organization’s board told Anadolu Agency.

During the global coronavirus outbreak, many Muslims around the world observe Ramadan under lockdown, Sadik Danisman said, adding that Yardimeli International Humanitarian Aid Association’s branches, representatives, and volunteers in Turkey’s 81 provinces continue their work in the field by taking all protective measures against the virus.

Since the announcement of COVID-19 pandemic and the first case confirmed in Turkey, all plans and strategy of the charity have been changed, he said.

“As a humanitarian organization, our responsibilities and duties have increased in the face of this pandemic, which affected the whole world, because we have a responsibility towards families with health problems and those having hard time making ends meet.”

Many people, including day laborers, as well as those who either lost their jobs, or were unable to work due to the novel outbreak, were added on top of the families, orphans and students, who were regularly supported by the association, Danisman stressed.

“So the new applications for receiving donations and aggrievement of people have prompted us to new actions,” he said.

Normally, the agency delivers 20,000 voucher cards for shopping to needy people every 15 days, he added.

The Ramadan activity budget has been revised immediately, Danisman said, noting that in addition to the actual budget, the association also added the emergency aid fund — kept as a reserve — to “alleviate the grievances” of people.

Danisman said the association eyes to use half of its Ramadan budget for food, hygiene materials and medical equipment, while 700,000 Turkish liras (about $99,000) were set for the holiday pocket money, gifts, and clothes in the Eid al-Fitr celebration for orphans.

Also, the charity allocated 300,000 Turkish liras (over $42,000) to the packed meals for iftar, while the remaining amount was set for the monthly payments of needy families and orphans, he added.

As a part of its activities at home and abroad, the association will also distribute zakat donations, or mandatory alms, and fitrah — a special form of charity on the eve of Eid holiday — to the needy in Ramadan.

Danisman added that the international projects and activities of the association abroad proceed without interruption during the period of pandemic.

Due to the current pandemic restrictions, collective gathering for iftar — the fast-breaking dinner — and crowded programs are not held in Turkey during Ramadan, he said.

Instead, the hot meals for iftar and food packages will be delivered to the families, Danisman noted.

“I believe the humanity has taken important lessons from the pandemic,” he said.

By taking protective measures against COVID-19, the aid agency is handing out food packages and vouchers for shopping to homes of orphans and needy people in Turkey, he said.

Danisman highlighted that the association also sends the amounts to be paid in cash to needy people via banks and the state’s postal service.

The charity head also stressed there is a “serious rise” in the number of people who applied for receiving donations from Yardimeli amid the coronavirus.

“In the first place, we meet the needs of our brothers and sisters, who are economically affected from the outbreak, especially the day laborers, unemployed, and those unable to work,” he said, adding that the charity also meets the needs of the elderly and the orphaned upon carefully investigating their poverty status.

Danisman said there was a drop in donations received by the association compared to the same period of the previous year, that many donors now prefer to directly pass their charity and donations to the people in need.

He said that the beneficent people, who were previously not able to identify the needy around them, now, with the economic affect of the pandemic, can directly reach the needy among their relatives, neighbors, community and friends. He believes that this explains why donations to the charity organization have dropped this year.

“In other words, at this time [of pandemic], the donors prefer to deliver their aid directly on their own rather than through NGOs,” he said.

The pandemic has killed over 263,800 worldwide, with total infections surpassing 3.75 million, while more than 1.24 million patients have recovered, according to figures compiled by the US-based Johns Hopkins University.