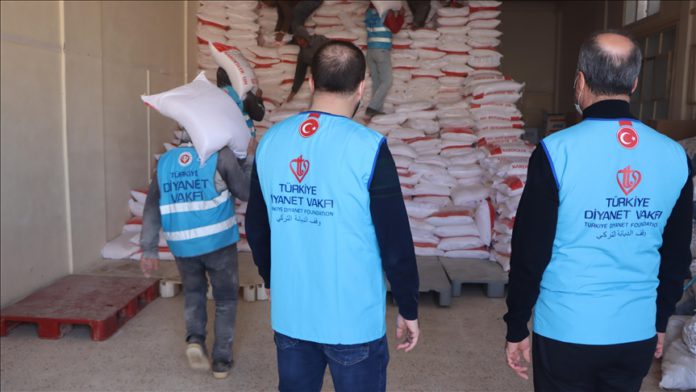 Seven truckloads of humanitarian aid by Turkey’s Diyanet Foundation were sent to northern Syria on Monday.

The provincial mufti’s Office and Turkey’s Diyanet Foundation branch in Sanliurfa launched the “Share Your Bread, Get Closer to Your Brother” campaign for Syrian families.

The aid, which will be distributed among families in the Operation Peace Spring area, contains flour.

Sanliurfa’s Mufti Mehmet Tastan said: “Our people and officials didn’t forget Syrian victims and oppressed brothers and sisters even during the pandemic. Our brothers mobilized before the winter for Syrians to have food on their tables.”

He also thanked the people who supported the campaign.

The aid, including flour, clothes, and dry food, collected from various provinces was brought to the Yayladagi district of southern Hatay province for dispatch to Syria.

The aid was distributed among families living in tents in rural areas of Idlib, a long-embattled region.

Turkey's All-Star 2020 to tip off Sunday

'Humans not dolphins behind drop in hamsi fish stocks'