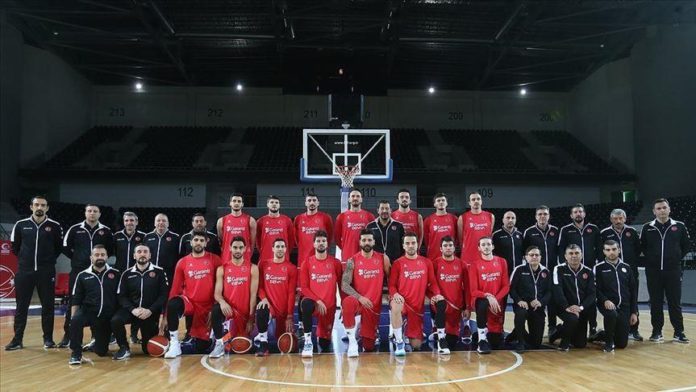 Turkey’s national basketball team has its eyes on the FIBA Olympic Qualifying Tournament in Canada’s Victoria.

Ranked 15th in the globe, Turkey will take on Uruguay on June 29 and play against the Czech Republic on June 30.

The Group B games that Turkey will compete in will be held at the Victoria Memorial Arena.

Canada, China, Czech Republic, Greece, Turkey, and Uruguay will play matches from June 29-July 4 to bag only one ticket to this summer’s Olympics.

The Tokyo 2020 Olympics will take place from July 23 to Aug. 8 after they were postponed for one year due to the pandemic.

Turkey’s manager Kerem Tunceri said on Monday that the whole team except Ilyasova and Korkmaz are in Istanbul to prepare for the Olympic qualifiers and then they will go to Canada on June 24 for training.

“… Ersan Ilyasova and Furkan Korkmaz will join our camp in Canada,” Tunceri said.

The 2020-21 NBA season for both Ilyasova and Korkmaz ended as the Jazz from the Western Conference and the 76ers of East failed to make it to the NBA Conference Finals.

There are two groups in Victoria, Group A, and B.

Turkey is in the same group (B) with the Czech Republic and Uruguay.

Meanwhile, Greece, China, and the hosts Canada are in Group A. The group winners will take on runners-up in the semifinal. The winners will face each other for the final on July 4.

Four nations in four tournaments will qualify for the Olympics. In addition to Victoria, there are three other host cities for the FIBA Olympic Qualifying Tournaments such as Belgrade (Serbia), Kaunas (Lithuania), and Split (Croatia).

Each tournament has two groups of three teams, Group A and Group B. Only four victors from each tournament will bag the tickets to Tokyo.