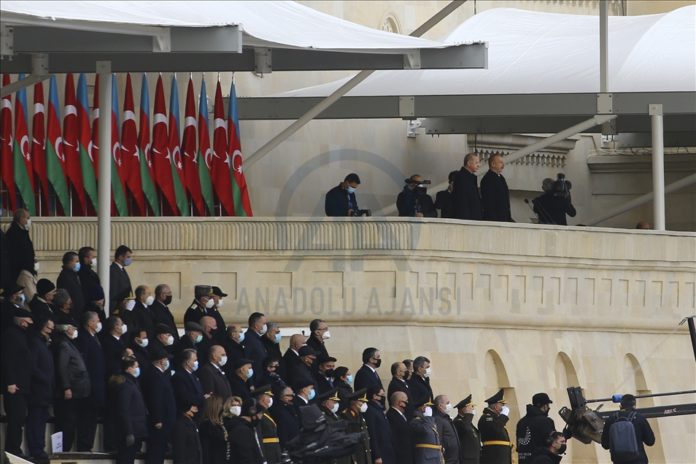 The Turkish and Azerbaijani presidents on Thursday addressed a large crowd at liberation celebrations in Baku for Azerbaijani territories liberated from occupation of Armenian forces.

Attending the ceremony of Victory Parade at the Azerbaijani capital upon invitation of President Ilham Aliyev, President Recep Tayyip Erdogan spoke at the opening ceremony of parade.

The parade is being held at the Azadlig Square to celebrate Azerbaijan’s recent military success in liberating its region of Nagorno-Karabakh from nearly 30 years of the Armenian occupation.

Erdogan in his speech expressed solidarity and unity with Azerbaijan and said “As Turkey, we have taken the two states, one nation motto of the great leader Aliyev [father of Ilham Aliyev] as a guide in our relations with Azerbaijan.”

Telling that the liberation of Azerbaijani lands from occupation does not mean the struggle is over, the Turkish president said, “The struggle that has been waged through political and military means until now will continue in many different fronts from now on.”

Erdogan also recalled nearly 30-year long conflict in the Upper Karabakh, saying: “We all saw that the region turned into ruins [during the Armenian occupation].”

“Laws of war were seriously violated and human dignity trampled in the Upper Karabakh,” he added.

Calling on Azerbaijan and Armenia to rethink relations, as nothing can be gained under the “Western imperialist goading”, he said: “A new era in the region will begin if people of Armenia take lessons from what happened in Karabakh.”

Azerbaijan felt Turkey’s support since the first hours of the recent Patriotic War with the Armenian forces in Karabakh, Aliyev said at the opening ceremony of the parade.

Azerbaijan shows to the whole world its unity with Turkey as the leaders of both countries attend the parade, Aliyev added.

He stressed that during the 44-day-war, Armenia committed “war crimes” against the Azerbaijani people, including attacking civilians with prohibited cluster and phosphorus bombs.

“Azerbaijan regained its territorial integrity on the battlefield,” he underlined.

He also said the Armenian army “fell to its knees” on the battlefield.

The parade features over 3,000 personnel, some 150 military hardware, including missiles and artillery systems, air defense systems, UAVs, warships and boats, as well as part of the military equipment seized by the Azerbaijani army from the destroyed Armenian forces during the Patriotic War.

During the 44 days of heavy fighting, Azerbaijan liberated several cities and nearly 300 settlements and villages from occupation.

The two countries signed a Russia-brokered truce on Nov. 10 to end the war, and work toward a comprehensive resolution.