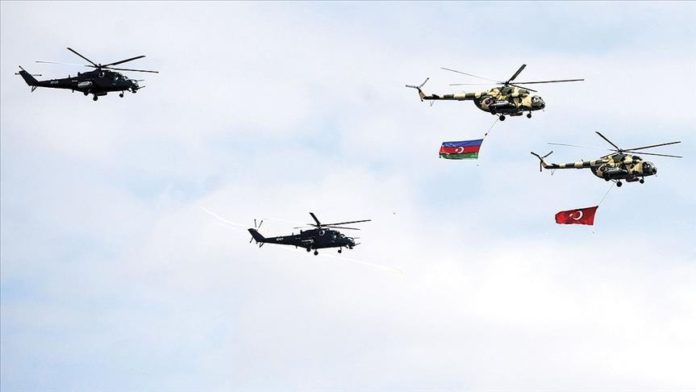 Turkish and Azerbaijani armies started on Monday joint military exercises in Baku, the latter’s Defense Ministry said in a statement.

The Mustafa Kemal Ataturk 2021 “joint live-fire tactical exercises” are being held in line with an agreement on bilateral military cooperation, the ministry said.

“The main objective of the exercises held with the participation of Azerbaijani and Turkish servicemen is to improve interoperability between the units of the armies of the two countries during combat operations, to develop military decision-making skills of the commanders, as well as their ability to control military units.”

The drills will last until June 30, and involve up to 600 military personnel, up to 40 tanks and other armored vehicles, 20 artillery pieces and mortars of various caliber, seven combat and transport helicopters, three unmanned aerial vehicles for various purposes, as well as up to 50 auto vehicles.

On June 15, Turkey and Azerbaijan signed the Shusha Declaration, a pact that focuses on defense cooperation and establishing new transportation routes.

The declaration affirms joint efforts by the two armies in the face of foreign threats, and for the restructuring and modernization of their armed forces.

Turkey was a key backer of Azerbaijan during the last year’s 44-day Karabakh conflict between Azerbaijan and Armenia. It erupted in September and ended with a Russian-brokered cease-fire on Nov. 10.

The truce saw Armenia cede territories it had occupied for nearly three decades.