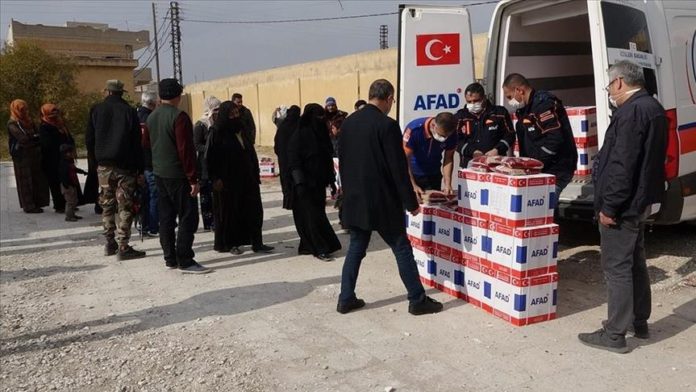 Turkish authorities have distributed humanitarian aid to people in need in areas of northern Syria which were liberated from terrorists in an operation last year, the provincial governor’s office said Thursday.

The Disaster and Emergency Management Authority (AFAD) in coordination with the Syria Support and Coordination Center, a division of the governor’s office of Turkey’s southeastern Sanliurfa province, gave food parcels to the needy in Ras al-Ayn and Tal Abyad districts.

AFAD, which organizes humanitarian aid distributions in neighborhoods and villages where families with no income are located, provides families with food parcels — enough for at least one month — based on the number of family members.

Ras al-Ayn and Tal Abyad were cleared of terrorists last October during Turkey’s Operation Peace Spring, which was launched to eliminate YPG/PKK terrorists in the region east of the Euphrates River to secure Turkey’s borders, aid in the safe return of Syrian refugees and ensure Syria’s territorial integrity.