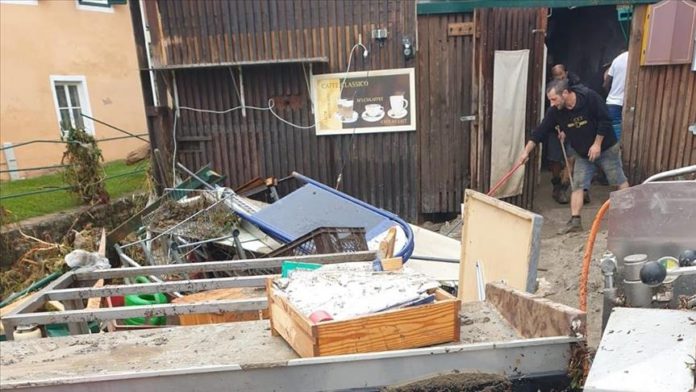 A Turkish-Austrian couple last week was rescued by their next-door neighbor from the devastating floods caused by downpours in parts of Europe.

The floods in Germany, Belgium, the Netherlands, and Austria wreaked astonishing devastation, killing close to 100 so far, with over 1,300 people still missing.

Speaking to Anadolu Agency, Salih and Ayse Karaaslan said their neighbor, Alexander Eisenmann, rescued them from the flood in the historic town of Hallein in the state of Salzburg, located on the border with Germany.

Salih Karaaslan and his wife own a restaurant in Hallein, and last week they saw floodwaters rising suddenly around the restaurant to a height of one-and-a-half meters (4.9 feet).

He said that he tried to coax his wife out of the restaurant but she was shocked by the force of the floodwaters and was frozen in place.

“While we were waiting at the corner of the restaurant, we called the firefighters and police, but no one answered. I had to decide whether to cross the street or drown,” he recounted.

“We didn’t have another chance. If we had stood there, the water probably would have swept us away and we would have drowned.”

“While drifting in the water, I grabbed my wife by the sweater and tried to continue the fight. Then our neighbor jumped into the water. With his help we managed to free ourselves from where the water was deep,” he added.

Ayse Karaaslan added: “When our next-door neighbor, Alexander Eisenmann, saw us in the water, he jumped right into the water without a moment’s hesitation to help us.”

Also speaking to Anadolu Agency, Eisenmann said that on that day his son called him and said two people were caught in the water, and that he immediately got into the water, tried to help the Karaaslan couple as much as he could, battling the force of the floodwaters.

He said that in the heat of the moment at first he couldn’t recognize the people who were in danger, and then realized that they were his next-door neighbors.

“Of course, it didn’t matter to me who they were. I entered the water with determination to help them, no matter the risk,” Einsenmann told Anadolu Agency.

“I was very happy that he called me,” Eisenmann said.

“He was very sincere, thanked me, and offered help.”

Ceyhun and Pazarci also reached out to the couple to lend a helping hand.

Kiran also thanked Eisenmann on Twitter, saying: “The bravery of Mr. Alexander with his human sense of responsibility is admirable.”