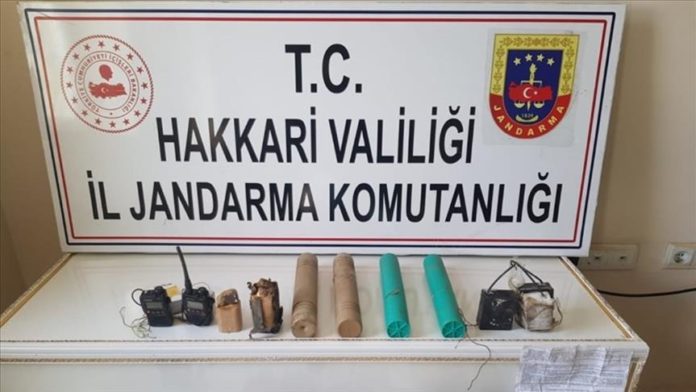 Turkish security forces on Sunday destroyed eight caves in eastern Turkey, and seized a huge cache of arms and ammunition in the country’s southeast, determined to have been used by the PKK terrorist organization.

Turkish gendarmerie forces found the caves in rural areas of the eastern Tunceli province, according to the governor’s office.

The caves, planned as hideouts by the PKK terror group, were destroyed as part of Operation Eren-7 Mercan Munzur.

In the caves, the gendarmerie units seized a large cache of ammunition and improvised explosives.

In a separate raid Saturday, gendarmerie forces also seized arms and ammunition in the southeastern Hakkari province of Turkey, the governor’s office reported.

As part of Operation Gendarmerie Specialized Sgt. Mehmet Guclu Camdali-1, another large cache of ammunition, improvised explosives, mines, communication devices, and other materials that are used in making explosives were seized.

The governor’s office said the operations in the region are still underway.

In its more than 35-year terror campaign against Turkey, the PKK – listed as a terrorist organization by Turkey, the US, and the EU – has been responsible for the deaths of over 40,000 people, including women, children, and infants.

*Writing by Merve Berker in Ankara.