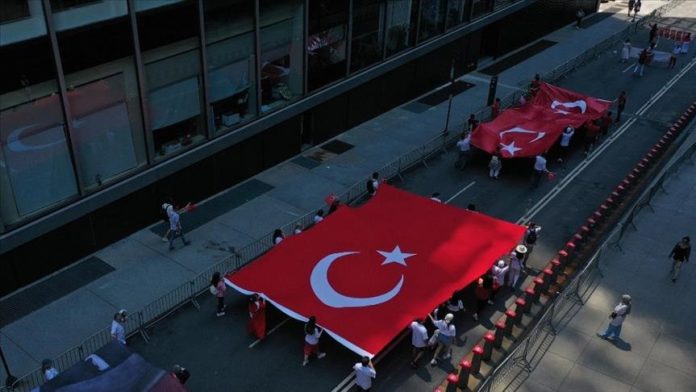 Thousands of Turkish Americans joined the Turkish Day Parade on Saturday in New York City, to celebrate an annual festival that highlights Turkish culture and traditions.

With the support and coordination of the Turkish Presidency’s Communications Directorate, the 39th annual parade saw participants carrying Turkish and American flags, and singing and dancing on Madison Avenue. A Turkish band Mehter (Ottoman Janissary Band) performance was also part of the parade.

In addition, a convoy of vehicles belonging to various nongovernmental organizations and Turkish soccer fan groups also made their way to the avenue.

The parade drew an estimated 5,000 people, according to organizers.

In a video message, Turkish Communications Director Fahrettin Altun said events like the parade are a beacon for Turkish people’s unity and solidarity.

“In addition, these events have a function that introduces the richness of our country to the American society, and conveys the voice of our nation,” said Altun.

A day earlier, the Turkish flag was raised on Wall Street to celebrate the festival.

Trump: No US involvement in Venezuela maritime raids