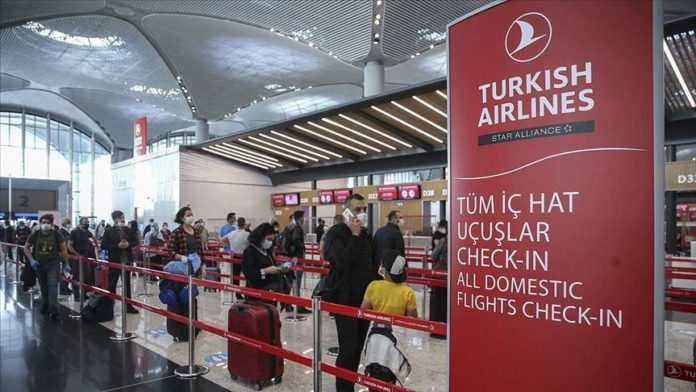 Turkey’s flag carrier Turkish Airlines will carry 25,000 passengers as it resumes domestic flights on Thursday after a two-month hiatus due to the novel coronavirus pandemic, according to its general manager.

The carrier, which reopened 30% of its flights, will operate 250 domestic flights, Bilal Eksi told reporters at Istanbul Airport.

These flights will increase gradually, Eksi said, adding that necessary measures had been taken to prevent crowds in airport terminals.

If enough progress can be made in the fight against the pandemic, flights may resume entirely in two weeks.

The carrier also announced this week that it would restart international flights with six countries — Germany, Switzerland, Sweden, the Netherlands, Austria and Denmark — as of June 18.

However, international passengers must receive travel permits from both the country of departure and arrival, he underlined.

Eksi said the resumption of flights did not indicate a complete opening, with China, for instance, allowing only one trip per week from any one country.

The coronavirus, which first appeared in China last December, has spread to 188 countries and regions across the world, dealing a severe blow to air travel on a global scale.

The virus has killed over 386,000 people worldwide, with total infections reaching over 6.5 million and more than 2.8 million people having recovered from the disease, according to figures compiled by the US’ Johns Hopkins University.

In Turkey, the virus has infected 166,422 people so far and claimed 4,609 lives as daily infections and deaths continue to slump. The vast majority of people have gone on to make a full recovery.