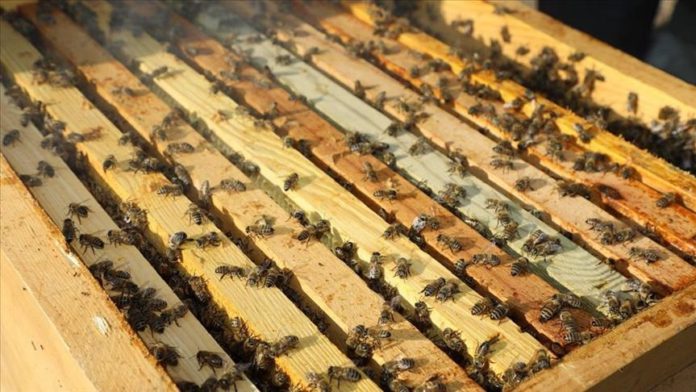 Turkish aid organizations are helping villagers in South Sudan to earn additional income to feed their families through rearing bees.

In early 2021, the Turkish Cooperation and Coordination Agency (TIKA) donated around 300 beehives, harvesting equipment, and beekeeping suits to villagers in South Sudan as part of a project initiated by a local non-governmental organization, the Support Peace Initiative Development Organization (SPIDO) to support beekeepers in rural areas.

Speaking to Anadolu Agency on the eve of World Bee Day, which is marked on Friday, Daniel Wani, chairman of a beekeepers group in Rajab East, southeast of the capital Juba, said they are hoping to enjoy the sweet rewards of beekeeping and processing honey with the help of Turkish Cooperation and Coordination Agency (TIKA).

He said that before they received support from Turkish organizations, they used to suffer a lot, but now their families can eat honey and also sell it to earn more income.

“This project is very important to us. It came at the right time. The donors and supporters gave us training. Now we are experts in beekeeping. Not like before, when we were using traditional ways. They gave us modern beehives. In our first harvest, we got a good quantity of honey, and that helped us with our families,” said Wani.

He said they are going to benefit more from this project in the coming three months, based on what they have seen from their first harvest.

Wani said the equipment and modern beehives supplied with the help of Turkish aid groups have helped to generate quality honey.

He said the only challenge facing them is flooding, which has taken away some of their beehives because they were placed near the river.

Victor William, one of the farmers, said keeping bees now has become easy for them because they have the equipment and modern beehives which they did not have before.

“The project that was initiated by SPIDO and supported by a Turkish organization is helping us a lot. Now we are getting something compared to those days when we were using traditional ways and nothing good was coming out,” he said.

Glamourson Musembe, program manager at SPIDO, said the project funded by the Turkish organization will continue supporting the beekeepers so that they will transform themselves economically.

“We are going to help the beekeepers to address the challenges facing them. This project was very instrumental to them because this is the first time, they started rearing bees. They had been living with bees but didn’t see it as something beneficial. They didn’t know that it’s something that can generate income,” he added.

Musembe said the community needs more training and support so they can do more to sustain themselves economically, but they don’t have more resources now because the Turkish organization is the only donor who is helping them to support the community.

He said they received 300 beehives from TIKA and gave them to 100 farmers on the outskirts of Juba to start their businesses after training them on beekeeping.

May 20, 2020
We use cookies to ensure that we give you the best experience on our website. If you continue to use this site we will assume that you are happy with it.Ok