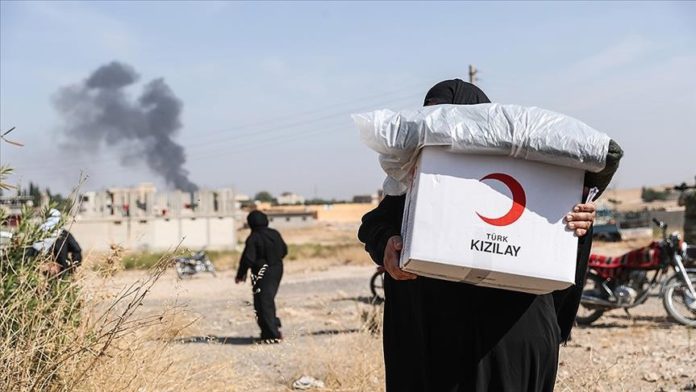 For the past 10 years, a major Turkish aid agency has been helping Syrians who have been displaced in their country or forced to seek refuge in neighboring countries.

In a statement, the Turkish Red Crescent said that around 600,000 lives were mercilessly destroyed as a result of the conflict that started in Syria on March 15, 2011.

This human tragedy displaced 5.6 million people, of which 3.6 million continue to live in Turkey, it said.

According to the statement, more than 11.5 million people who were displaced in the country had to live in tents they set up outside their settlements through their own means or in camps established by humanitarian aid organizations and 5.9 million people were in need of shelter.

Some 80% of those living in the camps are women and children and 60% of the children in the country face the risk of hunger, while 5 million children and their mothers are in urgent need of life-saving nutrition, the statement said.

Around 60,000 people have been hosted in these facilities and 300 million Turkish liras (nearly $40 million) worth of humanitarian aid including food, clothing and hygiene and education materials have been delivered to the camps.

The agency said 14 crossings along the border between Turkey and Syria continue uninterrupted.

With cooperation and donations, approximately 55,000 trucks of aid have been delivered to Syria until today.

The Turkish agency also took an active role in the evacuation of Aleppo, Eastern Ghouta and Al Waer and established logistic warehouses and tent cities in Syria to help people who were evacuated.

The agency provides regular support to those in need in the Peace Spring, Euphrates Shield, and Olive Branch operation zones.

The Turkish Red Crescent also helps the needy in 12 camps and 14 orphanages in Syria’s Idlib region and more than 8 million people in the region have been supported with aid.