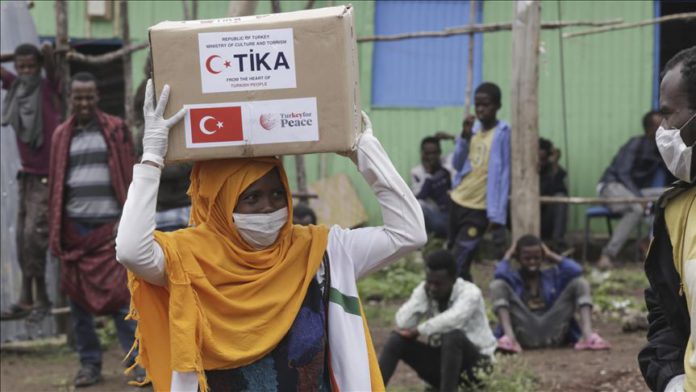 Mehmet Ali Yetis, the Ethiopia representative of the Turkish International Cooperation and Development Agency (TIKA), said the donation will help them during the Muslim holy month of Ramadan and through the COVID-19 pandemic.

Turkish Ambassador to Ethiopia Yaprak Alp was also present at the distribution ceremony held at Gelan IDP Center on the outskirts of capital Addis Ababa.

Abdella Siraj is a father of five and one of the beneficiaries. “This donation will keep us happy throughout the month of Ramadan,” he told Anadolu Agency.

According to Abdella, the government rations to each member of a family 15kg of rice and a liter of oil every month, but that was not enough.

“I am a good mason and I know carpentry as well,” he said, calling on the government to find a way of engaging the able-bodied IDP population in productive activities.

“We would be happier if we could earn incomes,” he said.

Isteriya Ahmed has been living at the center for the past three years. “The food we have been receiving from authorities is so scanty that I am forced to engage in the selling of Qat (a mild stimulant plant),” – a business which she described as unstable and not always profitable.

“I have to do it for my two children and my elderly mother,” she said.

TIKA has been active in Ethiopia doing both development and relief activities.

“That would help the country attract more foreign tourists,” he said, adding his agency had also renovated a 1912 Turkish Consulate in the eastern city of Harar.