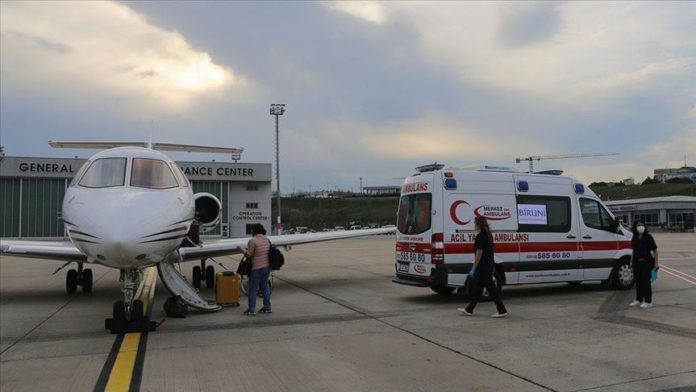 A Turkish national, heavily injured in a motorbike accident in Malta, is grateful to both Turkey and Malta for helping him return home.

Cem Kofoglu had the accident in a rural area in Malta, where he resides, on May 2 and said, recalling the incident: “I fell in a hole at a sharp bend and fell after losing control. Police officers patrolling there found me, and a qualified health team took me [from there].”

After an operation at a hospital, a doctor told him he could not get up for four to five weeks and asked if he had anyone to look after him at home.

The 34-year-old Kofoglu told Anadolu Agency that the doctor also told him he could not stay at the hospital due to the coronavirus and he needed to hire a nurse.

“Flights were also suspended due to the virus,” he said, adding that he is living alone and could not request any acquaintances to come help him as they could not make it to the country.

“I called our embassy [in Malta]. Thanks to them, they guided me,” he said.

With the guidance of the embassy, Turkey’s Health Ministry stepped in and answered Kofoglu’s e-mail in a very short time, just in two hours.

He said the ministry workers also speeded up the procedures which would normally take a longer time and Turkey’s ambassador to Valletta Kerem Kiratli also called him during the process. Embassy officials also did not leave him alone.

The software engineer Kofoglu was brought to Turkey in the early hours of Thursday via an air ambulance.

Stressing that they showed him due care at the Mater Dei Hospital, Kofoglu said: “I was nursed very well. I do not know if it was because the consulate was involved, but they carried out an incredible process. They were always next to me.”

He said they even asked him if he had a different diet due to the Muslim fasting month of Ramadan to prepare his food accordingly.

“There were other patients in the room, they had different food, I had different. Halal ones. They were such sensitive,” he praised.

‘Entrust me to Turkish medics’

As he learned he needed to spend a month or so in bed, Kofoglu wanted to spend the time in the Aegean province of Izmir, where his relatives live.

After his admission to Bozyaka Research Hospital in the city, Kofoglu said the service at this hospital was also “incredible”.

“I am so pleased. If there is something needed, they do it immediately,” he said, adding that he could feel happy despite having fractures all over his body.

“This is exactly the situation of ‘entrust me to Turkish medics’. I feel its comfort,” he said, referring to the Turkish Republic’s founder Mustafa Kemal Ataturk’s remarks showing his trust in Turkish physicians.

“I am grateful to both countries. I had a very unfortunate accident but the process has been dealt greatly by both countries,” he noted.

“But I must say, it is an incredible job that our Health Ministry sent an ambulance plane to another country and took its citizen, and they made it in such a short time,” he said, adding that he is proud of the state for having such mechanisms.

Kofoglu noted that while many countries cannot even help their nationals at home, the world should know the help given by the Health Ministry to an expat national.

Turkey's external assets at $225.8B in April