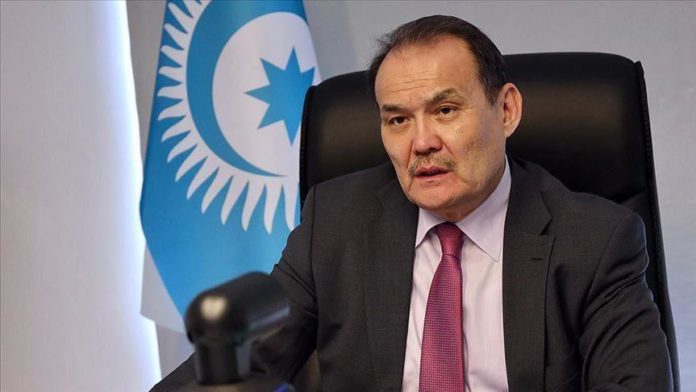 The head of the Turkic Council on Tuesday expressed “unconditional” support for Azerbaijan on a visit to the city of Ganja, where civilians have been targeted multiple times by Armenian missile strikes.

Speaking at a press conference, Secretary-General Baghdad Amreyev said the Turkic Council strongly condemned the attacks on Ganja — Azerbaijan’s second-largest city which is also located far from the front line — and urged the international community denounce Armenia’s strikes on civilians.

Underlining that the body was closely following the developments in the Nagorno-Karabakh region, Amreyev said: “Turkic-speaking countries, the Turkic world and the Turkic Council unconditionally support the right of Azerbaijan to save its occupied lands.”

“This is a patriotic war for the brotherly Azerbaijani people. We stand by Azerbaijan in this war. We wish peace and victory to our friendly nation,” he said.

Amreyev conveyed the Turkic Council’s support for solving the conflict in a peaceful way based on Azerbaijan’s territorial integrity and in accordance with the resolutions of the UN Security Council.

In two attacks on Ganja, Armenian missiles killed some two dozen civilians — including children — and injured scores of others.

A new humanitarian cease-fire entered into force on Saturday.

Four UN Security Council resolutions and two from the UN General Assembly, as well as international organizations, demand the “immediate complete and unconditional withdrawal of the occupying forces” from the occupied lands of Azerbaijan.

World powers, including Russia, France and the US, have called for a new cease-fire. Turkey, meanwhile, has supported Baku’s right to self-defense and demanded the withdrawal of Armenia’s occupying forces.