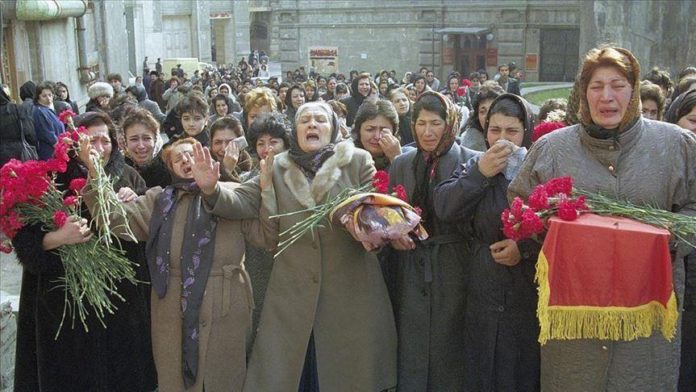 The Turkic Council on Wednesday honored the victims of the 1918 genocide of Azerbaijani people.

“March 31, which is commemorated in the Republic of Azerbaijan as the Day of Genocide of Azerbaijanis, significances the memory of the massacre committed against Azerbaijani people in March 1918 by the Armenian forces in Baku, Shamahi, Guba, Zengezur, Karabakh and Nakhchivan,” Baghdad Amreyev, the secretary-general of the Turkic Council said in a statement.

He recalled that the late Azerbaijani President Heydar Aliyev signed a decree in March 1998 in order to draw the attention of the international community to the tragic events of the near past and to symbolize all the massacres against the Azerbaijanis happened in the history.

The decree had declared March 31 as the Day of Genocide of Azerbaijan.

Amreyev went on to say that today the people and the government of Azerbaijan pay tribute to the “valuable memory of the victims” and urge the world community to recognize these “atrocious actions.”

“On this important occasion, we join our Azerbaijani brothers and sisters in commemorating with respect all the martyrs and reiterate that as the Turkic Council we will work with all our capacity to ensure peace and stability in our region and beyond,” he added.

The 1918 genocide jointly committed by armed Armenian groups and Bolsheviks — a revolutionary party that was committed to the ideas of Karl Marx — claimed the lives of around 50,000 Azerbaijani people.

The Turkic Council, or the Cooperation Council of Turkic-Speaking States, was established in 2009 as an intergovernmental organization, with an overarching aim of promoting comprehensive cooperation among Turkic-speaking states.

The council consists of Azerbaijan, Kazakhstan, Kyrgyzstan, Turkey, and Uzbekistan as member countries and Hungary as an observer state.