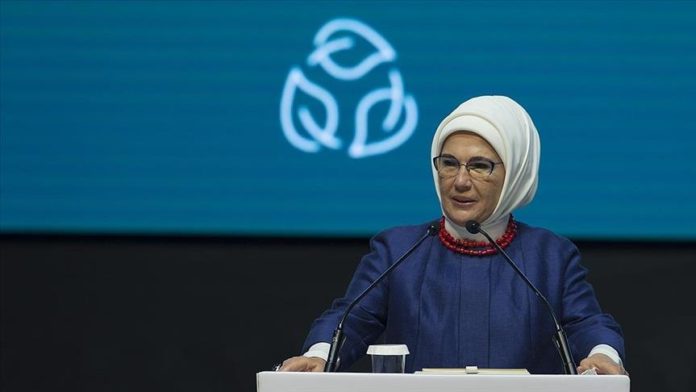 Led by First Lady Emine Erdogan, the project aims to reduce the volume of non-recyclable waste. It is also listed in the Environmental Performance Review of the Organization for Economic Co-operation and Development.

The award for the project, which has successfully met the responsible consumption and production goal, will be given for the first time.

It will be presented to Erdogan by UNDP Turkey Resident Representative Claudio Tomasi at a ceremony in the capital Ankara on Thursday.

Turkey’s project aims to reduce the volume of non-recyclable waste. It is also listed in the Environmental Performance Review of the Organization for Economic Co-operation and Development.

The amount of waste is expected to reach 2.2 billion tons globally in 2025, from 1.3 billion tons currently, according to a World Bank report, while this figure is forecast to reach 38 million tons in 2023.

Also, the project brought 17 billion Turkish liras (over $3 billion) to the Turkish economy from June 2017 to the end of 2020. The average USD/TRY exchange rate was 5.55 during the period.

All eyes on Indian judiciary’s interpretation of copyright law in digital...