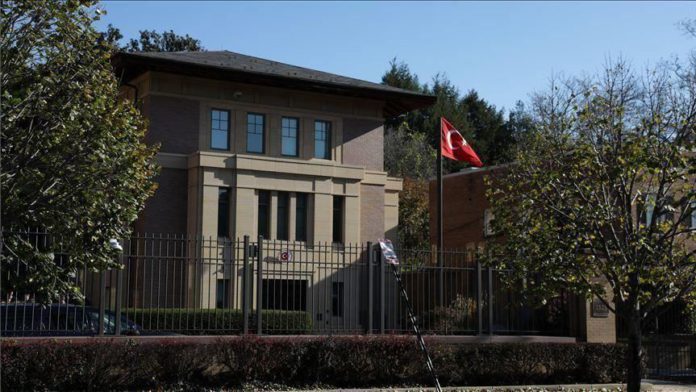 Turkey’s US Embassy slammed Thursday its US counterparts reaction to an Istanbul court’s ruling, urging Washington to “refrain from intervening in the legal proceedings.”

“Mr Metin Topuz, former Turkish staff member of the US Consulate in Istanbul, was found guilty by the relevant Court in Istanbul, for assisting the FETÖ terrorist organization. He is legally entitled to appeal this decision in seven days,” the Turkish Embassy said on Twitter.

“The statement of the US Embassy in Ankara, criticising the lawful decision concerning Mr Topuz and in this context, questioning the credibility of the court constitutes an interference in the independence of judiciary and as such is not in conformity with established rules and practices governing the roles and responsibilities of foreign diplomatic missions,” it added.

Topuz, an employee of the US consulate in Istanbul, was sentenced to eight years and nine months in prison on charges of helping the Fetullah Terrorist Organization (FETO), the terror group behind a defeated 2016 coup attempt in Turkey.

Shortly after the verdict was handed down, the US’s Turkish Embassy questioned the decision, saying its observers “have seen no credible evidence to support this conviction and hope it will swiftly be overturned.”

“The allegations made about Mr. Topuz’s official duties misrepresent both the scope and nature of the important work undertaken by our local staff on behalf of the U.S. government and in the promotion of our bilateral relationship,” it said.

The embassy in Washington responded, saying “we would like to advise the US Embassy to respect the decisions of the independent Turkish courts, and in any case refrain from intervening in the legal proceedings.”

According to the indictment, Topuz had been accused of having contacts with Zekeriya Oz, a key FETO fugitive, as well as former police chiefs and soldiers affiliated with the terrorist group and aiding in their activities.

He was also accused of four other crimes, including attempting to topple the Turkish government and espionage, but was acquitted on those charges due to lack of evidence. The court ruled for the continuation of his detention.