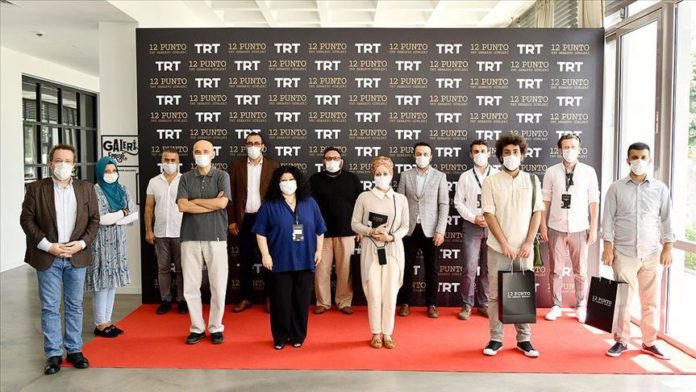 Farhadi met an audience for a live broadcast to talk about cinema, directing and storytelling that was moderated by director Faysal Soysal.

He said there are two types of directors: “One are director who have their own manifesto, troubles and ideologies; they set out to make films to tell their own intention. Other directors or producers do not think what the film will tell.”

Fahradi said a successful director first considers the values ​​of the past, such as childhood memories, when making a movie.

“For example, in the film, ‘A Separation’, an image first appeared in my mind of the past and I proceeded toward it and wrote the script of the film. Moreover, no other fact, reaction or information has triggered me as much as that picture,” he said. “In fact, it is more impressive that we do not know where the movie will go when we set out for a movie. In other words, films with a manifesto or ideology cannot be permanent, because they actually arise from the ideas of the directors, not from the hearts.”

Stating that all stories emerge through a clash or fusion of love and violence, Fahradi said: “There is love all over the world today and there is violence that harms it. But in the modern period we live, the way of narrating love has different languages. For this reason, changes in the world change the language and form of these two emotions.”

Farhadi said he does not expect an audience from around the world to understand Iranian culture.

“This should not be understood as it was insignificant. In my opinion, if I understand the scenario that I wrote and I was satisfied, I think that people in another part of the world will definitely be satisfied and will be affected,” he said.

Underlining the global success of Iranian cinema, the renowned director said: “Iranian cinema was first a reaction against European cinema, especially Hollywood. It became so common that the audience wanted to see the real, simple life on the street.”

“In this sense, I see the concepts of life and reality differently. What you see in many Iranian films is a different perspective on life. In fact, we add a point of conflict to reality in our movies so that we can perceive life better with the perception of reality,” he said.

He stressed in a realistic movie, it is success to tell something from life. “But creating new depths under the world that appears in the movie is actually art,” he said.

The 12 Punto TRT Screenplay Days, which contributes to the development of projects by filmmakers at the stage of the script, will end with an award ceremony Saturday.

The full interview can be viewed here: https://www.youtube.com/watch?v=g7YeO4oZpQs

*Writing and contribution by Erdogan Cagatay Zontur in Ankara.