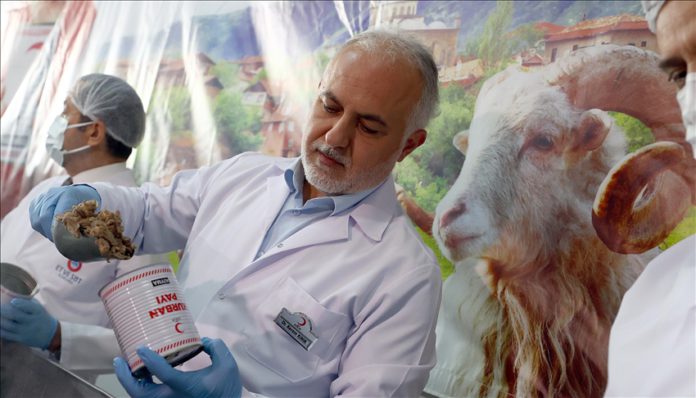 Turkey’s state-run aid groups are extending a helping hand to 25 million people across the globe for the Muslim holiday of Eid-al Adha, or the Feast of the Sacrifice.

The holiday commemorates the willingness of the Prophet Ibrahim, or Abraham, to sacrifice his son at God’s command, before the last-minute divine substitute of a ram. During the holiday, sacrificed meat is distributed to the needy.

“We aim to extend the helping hand of our nation to more than 20 million oppressed, victims, needy and refugees at home and abroad as part of the 2021 Eid activities,” Ihsan Acik, second chairman of the board of trustees of the Turkish Diyanet Foundation (TDV), a charity run by the country’s top religious authority, told Anadolu Agency.

For the past 27 years, the foundation has slaughtered and distributed more than 2.8 million animals across the world and “delivered the blessings of our nation to millions of people in need,” said Acik.

TDV marks the holiday this year with the theme: “Share your sacrificed animal meat, get closer with your brother,” he said.

The group will focus on those who were financially affected by the coronavirus pandemic and lost jobs and income sources, he stressed.

“Considering the coronavirus measures, our people mostly prefer to donate their sacrifice animals instead of slaughtering them on their own,” he said.

The meat will be distributed across the country and abroad to “oppressed brothers and sisters in our heartland,” including Africa — where hunger, poverty and internal conflicts are intense — as well as Central Asia, the Balkans, Caucasus, Rohingya refugee camps, Palestine, Yemen, Bangladesh and other regions “from the Far East to Latin America,” said Acik.

Animals entrusted to TDV to be slaughtered and distributed will be slaughtered in all 81 provinces of Turkey, 75 countries and 280 regions across the globe, he said.

He also underlined that the number of animals entrusted increases every year, and last year more than half a million animals were slaughtered in Turkey and in 74 countries and 308 regions.

The Red Crescent of Turkey, also known as Kizilay, intends to reach nearly 5 million people, including 2.2 million in Turkey and 2.5 million abroad as part of its Eid al-Adha campaign, the head of the charity told Anadolu Agency.

“The Red Crescent has been reaching the merciful hand of our benevolent nation to all oppressed geographies of the world for 153 years. This year, although we have limited our access network due to the pandemic, we are organizing sacrificial slaughters in 21 countries,” said Kerem Kinik.

With the “Red Crescent Sacrifice Model,” philanthropists will be able to perform sacrifices in accordance with religious purpose, he said.

Thanks to the model, sacrifices will be selected by veterinarians and during the first three days of the holiday animals will be slaughtered under Islamic conditions in modern slaughterhouses in hygienic environment on behalf of donors in the presence of religious officials, veterinarians and notaries, he said.

“In the distribution of meat and meat products to be obtained from the slaughterhouses in 2021, those affected by disasters and those who have lost income due to the pandemic will be among the priorities of Kizilay,” he said.

The Red Crescent plans to “extend the nation’s hand of mercy” with nearly 52,500 animals sacrificed in Turkey.

Also, the meat will be roasted, canned and distributed throughout the year, said Kinik.

“The total number of sacrificed animals targeted for abroad was determined as 100,000. This year, it is aimed to reach 2.5 million people in need in return for 100,000 animals to be slaughtered abroad,” he said.

A “significant portion” of meat will be distributed to refugee camps, especially in Syria, to Rohingya refugees, refugee camps in Iraq, Bosnia and Herzegovina, and in Africa.