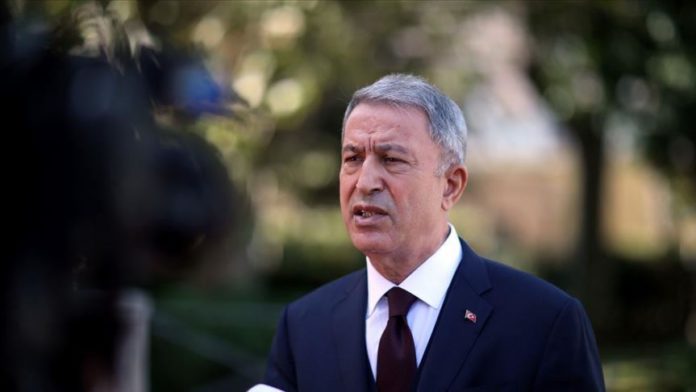 Turkey’s defense minister congratulated the 5th President of the Turkish Republic of Northern Cyprus Ersin Tatar, who was elected on Sunday, said the Turkish National Defense Ministry in an official statement on Monday.

According to the statement, Hulusi Akar said the elections proved that the Turkish Cypriots and their independent state have an exemplary democracy.

Turkey will continue to use its rights derived from international agreements and remain as a strong guarantor of peace and stability on the island, which had been secured with Turkey’s Peace Operations in 1974, the statement noted.

Celik, tweeting on the election results, praised the democratic atmosphere in the elections, and added that the Turkish Cypriots conveyed a very clear message to the world by electing Tatar, an ardent advocate of TRNC’s rights and interests.

Cooperation will develop even further between Turkey and TRNC as a result of yesterday’s elections, Celik noted.

Tatar, the prime minister and presidential candidate of the National Unity Party, won Sunday’s presidential runoff in the TRNC with 51.74% of the votes against incumbent Mustafa Akinci, who ran independent and secured 48.26% of the votes, according to the election results.