TurkishPress
Home News 'Turkey’s response to coronavirus has been exemplary' 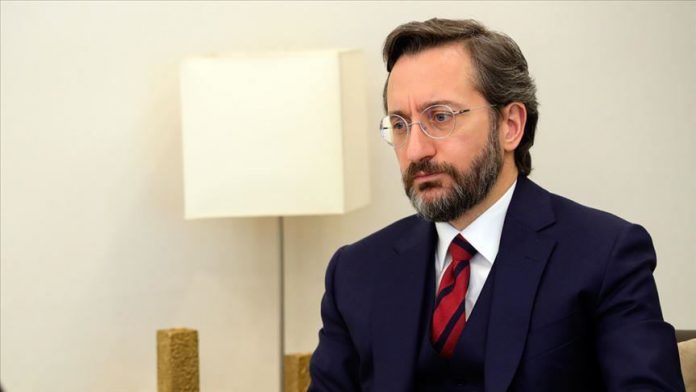 Turkey has shown an “exemplary” stance during the novel coronavirus outbreak, that claimed the lives of thousands around the globe, the country’s communication director said on Monday.

“Turkey’s response to the coronavirus crisis has simply been exemplary. Why? Our President [Recep Tayyip Erdogan] has directed our government that we would act in the most humanitarian way possible regardless of the costs. Our citizens and those in need around the world can count on Turkey!” Fahrettin Altun said on Twitter.

Turkey so far delivered medical aid to at least 57 countries to step up their fight against COVID-19 pandemic.

“Just as we brought back home our citizens from many countries, we left behind supplies as much as we could. We care not only about our citizens but all those affected around the world,” he said.

The Turkish government has also repatriated around 60,000 of its nationals from foreign countries since the start of the pandemic.

Altun stressed that his country was also able to bring back around 25,000 Turkish citizens who wanted to be in their homeland during the Muslim fasting month of Ramadan, which started on April 24 in Turkey.

He also said that under the direction of the country’s president, none of the Turkish citizens will be “abandoned” anywhere around the world.

“The latest example of this was the case of Mr. [Emrullah] Gulusken. We were able to bring him back in an ambulatory jet upon his daughter’s appeal on social media,” Altun said.

Turkey evacuated its citizens from Sweden who contracted the novel coronavirus but was not given treatment.

A Turkish air ambulance left Malmo Airport at 9 a.m. local time (0700GMT) to bring stranded Gulusken and his family from Sweden and arrived at the Ankara Esenboga Airport at 1.30 p.m. local time (1030GMT). After routine health checks, the patient and his three children were taken to Ankara Sehir Hospital.

In 2018, a total of 84 Turkish citizens who fell ill were brought to the country from abroad by the ambulance jet, while another 76 nationals used the jet in 2019.

Altun also hailed the drop in the number of coronavirus infected persons in the country, as Turkey on Sunday recorded the lowest number of new cases in the past 20 days, with the daily cases standing at 2,357.

“We are in receipt of some great news a few days into the holy month of Ramadan. Today, we saw the lowest number of new infections in the last 20 days. We are seeing a plateauing and downward trajectory of the curve. Ramadan has already started blessing us!”

Meanwhile, the coronavirus death toll in Turkey stands at 2,805, and a total of 29,140 patients have been discharged from hospitals after recovering from the virus.

After originating in China last December, COVID-19, the disease caused by a coronavirus, has spread to at least 185 countries and regions across the world. Europe and the US are currently the worst-hit regions.

The pandemic has killed more than 207,400 people, with total infections nearing to 3 million, while around 875,400 have recovered from the disease, according to figures compiled by the US-based Johns Hopkins University.