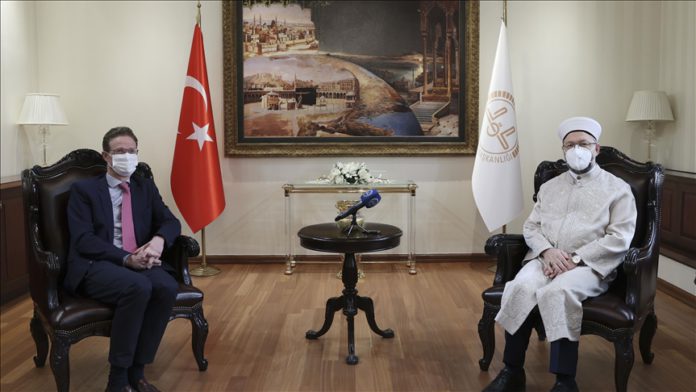 Meeting Wednesday, Turkey’s religious official head and the top EU envoy in the country discussed issues such as freedom of religion and human rights in Europe.

Ali Erbas, the directorate head, said his organization has been cooperating with the EU for some 40 years, adding that his meeting with Nikolaus Meyer-Landrut, head of the EU Delegation in Turkey, would hopefully boost the quality of their interaction.

Pointing to the importance of people co-existing peacefully, Erbas said all belief systems suggest unity and solidarity among people, adding that adhering to such religious systems would eradicate hostility and ensure peace around the globe.

Erbas said that under Islamic thought, killing one human being equals killing all humanity, but rescuing one is valued as if one rescued all of humanity, adding that he, as a Muslim, works hard to ensure peace among people worldwide.

According to Erbas, Turkey also fights terror groups that seek to exploit Islam and called for all parties to stop those seeking to cause chaos, war, and terrorism.

Attacks on mosques in the Western world were among the issues Erbas pointed to during the meeting, as he argued holy places should be protected regardless of their religious affiliation.

Meyer-Landrut, for his part, said human rights, freedom of belief, and non-religious people are some of the core elements of the EU and called for joint action against discrimination of any kind.

The EU diplomat said collaboration between different races and religions throughout history had benefited societies, whereas fights and hatred served to help no one.