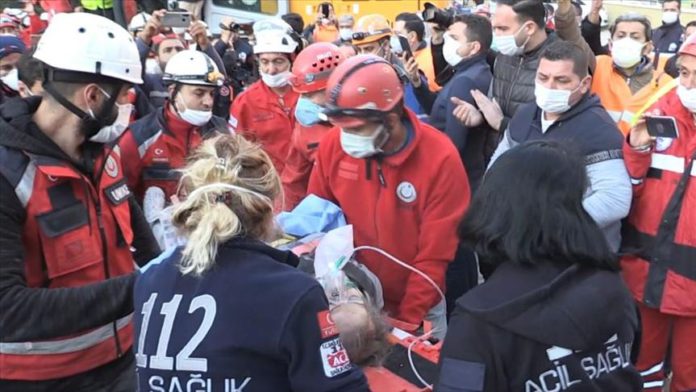 Hours after a powerful earthquake struck Turkey’s Aegean coast, survivors were pulled out of the rubble — shaken but resilient.

Rescue workers have pulled out a total of nine people so far.

Nurcan Tosun, 50, was rescued in the Seferihisar district after 17 hours.

Gunay Ozisik and Erol Subas were rescued nine hours after the quake.

Ozisik’s father spotted his son under the debris through rescue cameras and spoke to him.

Another earthquake victim, Buse Hasyilmaz and her family were rescued after nine-and-a-half hours.

Sixty-two-year-old Emine Eren was pulled out after 14 hours.

Hulya Ozmet and Inci Okan were also pulled out alive after 17 hours.

Anothe two were also pulled out after 17 hours

A cat was also among the rescued.

They were all taken to hospitals for health checks.

Twenty-five people were killed and at least 804 injured in the magnitude-6.6 earthquake on Friday.