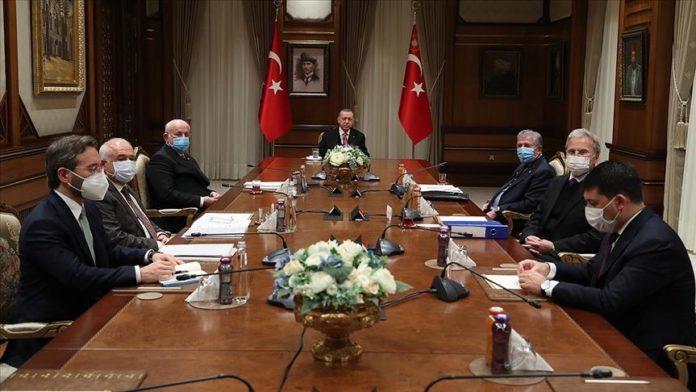 The meeting of the board, chaired by President Recep Tayyip Erdogan, lasted almost one and half a hours.

In a statement, Communications Director Fahrettin Altun said the board discussed the US’ sanctions decision and matters pertaining to education and family institution.

The US’ decision of unilateral sanctions on Turkey, a NATO ally, was condemned, it said, adding the steps to be taken against this wrong decision on issues of national security and sovereignty of Turkey were evaluated.

Turkey, however, stressed that the S-400 would not be integrated into NATO systems, and pose no threat to the alliance or its armaments.

The sanctions, coming under the Countering America’s Adversaries Through Sanctions Act (CAATSA), target the Defense Industries Presidency (SSB), including Ismail Demir, head of the SSB, and three other officials.

Altun said the Presidential High Advisory Board meeting also evaluated steps that can be taken as a state and a nation to protect and strengthen the individual, family and society.

The statement said Turkish President Recep Tayyip Erdogan stressed the importance of the education system should be based on love, respect, morality, compassion and grace, emphasizing the sensitivity of developing the minds and hearts of children and young people.