TurkishPress
Home Diplomacy Turkey's president vows not to lose even one more child to terror... 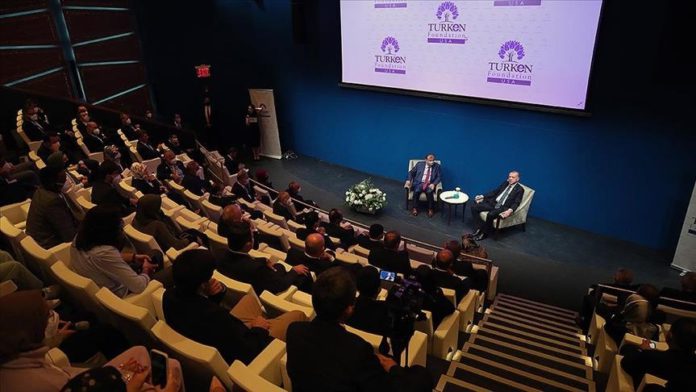 Turkey will work to prevent the recruitment and exploitation of children and young people by terrorist groups, President Recep Tayyip Erdogan said Monday.

“Be it Daesh, be it the PKK or be it FETO, we do not have even one more child to lose to terror groups,” Erdogan said in his address to the board of the Turken Foundation at the newly-opened Turkevi Center in New York City.

The Fetullah Terrorist Organization (FETO) and its US-based leader Fetullah Gulen orchestrated the defeated coup of July 15, 2016 in Turkey in which 251 people were killed and 2,734 wounded.

“We are feeling the pain of every youth who has knowingly or unknowingly fallen into networks of these structures,” said the Turkish president, adding the government will work more for the youth than the terror groups do.

“If they [terror groups] reach one youth, we will work to reach hundreds, thousands, but we will not let the pack of these traitors poison our youths’ minds and hearts,” said Erdogan.

His remarks came amid a long-running sit-in by parents in Turkey’s southeastern province of Diyarbakir who are demanding the release of their children by the PKK terror group.

The parents, who are protesting in front of the office of the People’s Democratic Party (HDP), say their children have been kidnapped and recruited by the terror group through the political party’s provincial headquarters.

So far, scores of children have been reunited with their families after efforts of the security forces with the grieving parents.