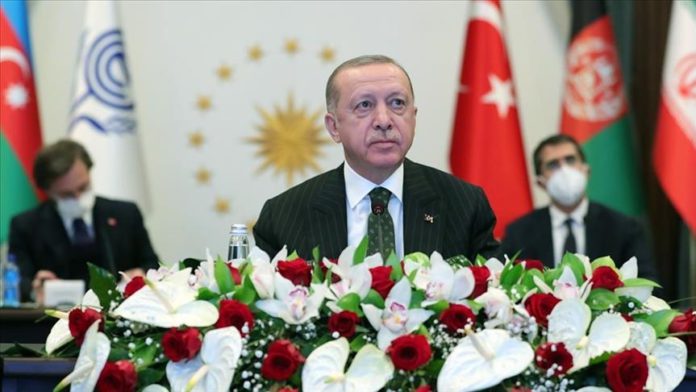 The summit was virtually held with the participation of leaders from Afghanistan, Azerbaijan, Iran, Kazakhstan, Kyrgyzstan, Pakistan, Tajikistan, Turkmenistan, and Uzbekistan.

ECO is a political and economic intergovernmental organization founded in 1985 in Tehran by Iran, Pakistan, and Turkey with a goal of sustainable economic development of member states, and the region as a whole. Afghanistan and former Soviet republics also joined the organization in 1992, forming one of the biggest regional blocs in Asia and beyond.

The Turkish president called on ECO members to enhance relations in all areas with Northern Cyprus and support the Turkish Cypriots against the injustices they face.

The island of Cyprus has been divided into the Turkish Republic of Northern Cyprus (TRNC) in the north and the Greek Cypriot administration in the south since 1974, when a Greek Cypriot coup aimed at Greece’s annexation of the island was followed by violence against the island’s Turks and Ankara’s intervention as a guarantor power.

On sanctions against Iran, Erdogan said the end of the unilateral sanctions will contribute to the economic prosperity and stability of the region.

During his term, former US President Donald Trump embarked on what he called a “maximum pressure” campaign that included unilaterally withdrawing the US from the 2015 nuclear deal world powers struck with Iran, and imposing biting economic sanctions that have hobbled the Iranian economy.

In retaliation for the US move to reimpose sanctions, Tehran has taken successive steps away from its agreements under the Joint Comprehensive Plan of Action that it maintains are reversible, but vows it will not take such action until Washington lifts the sanctions imposed during the Trump administration.

Underlining the importance of China’s Belt and Road Initiative (BRI), Erdogan said Turkey supports this initiative on a “win-win” basis.

China’s BRI is an ambitious program to connect Asia with Africa and Europe via land and maritime networks along six corridors for improving regional integration, boosting trade, and stimulating economic growth.

Regarding recent developments in the region, Erdogan reiterated Turkey’s support for Azerbaijan.

“From now on, our priority is to help establish security and stability in Karabakh to eliminate the damage of the 30-year occupation together,” Erdogan said.

Before the recent conflict, about 20% of Azerbaijan’s territory had been under illegal Armenian occupation for nearly three decades.