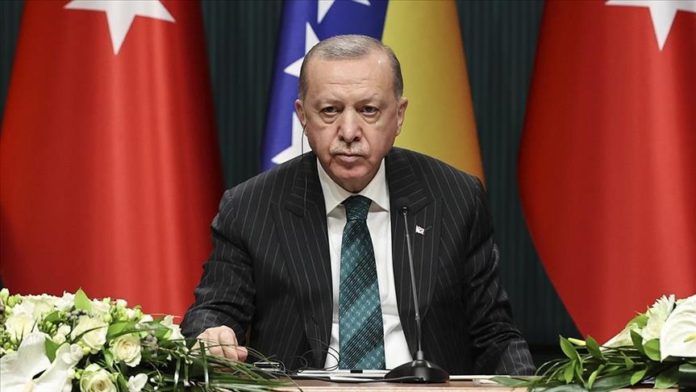 Highlighting Ankara’s decisive position on the Eastern Mediterranean issue, Turkey’s President Recep Tayyip Erdogan said on Tuesday his country will not step back from it.

Speaking at a joint news conference with members of the Presidential Council of Bosnia and Herzegovina in the capital Ankara, Erdogan said Turkey is in a decision-making position in the Eastern Mediterranean and its determined position remains the same.

No compromise is possible for Turkey in the Eastern Mediterranean, he said.

Responding to a question on diplomatic contacts between Ankara and Cairo, Erdogan said Egyptian people do not contradict Turkey.

Turkey will send 30,000 doses of COVID-19 vaccines to Bosnia and Herzegovina, the Turkish president said, and added that the country aims to expand the trade volume with Sarajevo to $1 billion as soon as possible.

For his part, head of Bosnia’s Presidential Council Milorad Dodik said they are interested in the TurkStream pipeline.

Despite the COVID-19 pandemic, ties between the two countries grew, he stressed, pointing to the deals signed between Ankara and Sarajevo.

The 930-kilometer (578-mile) TurkStream pipeline will carry Russian gas under the Black Sea through Bulgaria, Serbia, and Hungary, with another section reaching Turkey.

The project is the biggest-diameter offshore gas pipeline in the world laid at such depths with a capacity of 31.5 billion cubic meters per year.