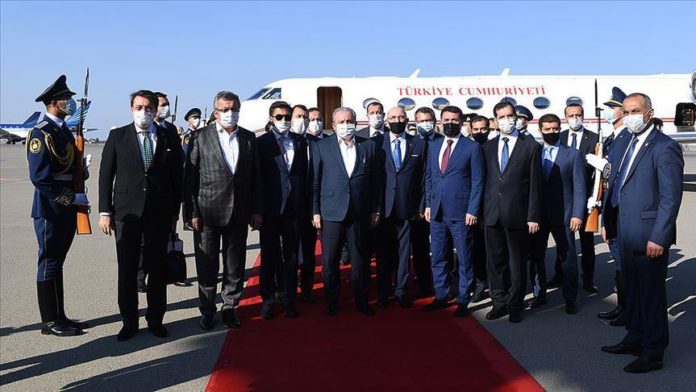 The Turkish parliament speaker along with a delegation of deputies arrived Sunday in Azerbaijan on a three-day official visit amid the ongoing Upper Karabakh conflict.

Speaking to reporters upon his arrival at the Baku Heydar Aliyev International Airport, Mustafa Sentop congratulated Azerbaijan on its 29th Independence Day.

“We stand by the just cause of Azerbaijan, we support them and that our relation is a unique one in the context of of ‘one nation, two states’,” Sentop said, adding that they will reiterate these thoughts in the upcoming meetings.

“We came with a strong, broad committee from the Turkish Grand National Assembly,” he said.

The Turkish speaker is due to be received by Azerbaijani President Ilham Aliyev on Monday. He will also meet his Azerbaijani counterpart, among other high-level officials.

On Tuesday, Sentop will address Azerbaijani lawmakers in the National Assembly.

Azerbaijan declared independence not once but twice in the 20th century — in 1918, with the fall of the Russian Czarist regime, and regained independence after the collapse of the Soviet Union in 1991.

Today, it is marking the day with both pride and sorrow, as it comes amid deadly Armenian attacks in the wake of a longstanding dispute in Upper Karabakh.

Relations between the two former Soviet republics have been tense since the early 1990s when the Armenian military occupied Upper Karabakh, or Nagorno-Karabakh, an internationally recognized territory of Azerbaijan.

The second cease-fire went into effect Saturday midnight (2000GMT). It was reached between Baku and Yerevan after the Oct. 10 truce – meant to allow an exchange of prisoners and the recovery of bodies – was breached hours later by Armenian missile attacks on Azerbaijan’s city of Ganja.