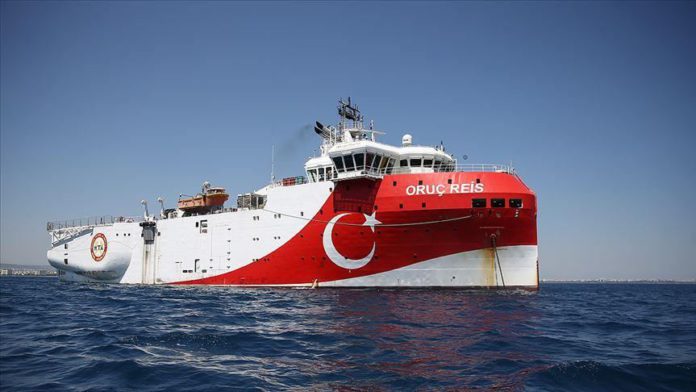 Donmez stressed that the search activities in Mediterranean and Black Sea will continue nonstop for achieving Turkey’s energy independence.

Oruc Reis will continue its activities in the Eastern Mediterranean with Cengiz Han and Ataman vessels until August 23.

The seismic vessel was built by Turkish engineers in a domestic shipyard in Istanbul.

The vessel, which has 30 years of service life, can sail non-stop for 35 days.

The ship has a helicopter pad, hydrography and oceanography features and it has the ability to scan the sea-floor up to depth of 15,000 meters.

In 1974, following a coup aiming at Cyprus’s annexation by Greece, Ankara had to intervene as a guarantor power. In 1983, the TRNC was founded.

The decades since have seen several attempts to resolve the Cyprus dispute, all ending in failure. The latest one, held with the participation of the guarantor countries — Turkey, Greece, and the U.K. — came to an end without any progress in 2017 in Switzerland.

Turkey: Daily coronavirus recoveries up with over 1,600