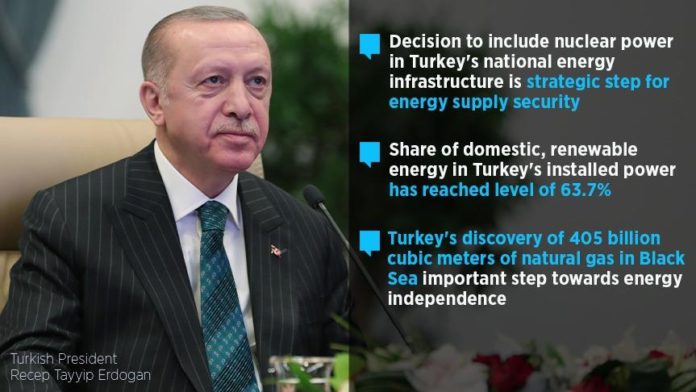 Akkuyu Nuclear Power Plant (NPP) will produce 35 billion kilowatt-hours of electricity annually to meet around 10% of Turkey’s power consumption, said the president via video link on Wednesday at the groundbreaking ceremony of the plant’s third unit.

Recep Tayyip Erdogan said the power plant was equipped with the most advanced security systems to ensure it complies with the International Atomic Energy Agency standards.

The decision to include nuclear power in Turkey’s national energy infrastructure is a strategic step for energy supply security, Erdogan said, and noted that the share of domestic and renewable energy in the country’s installed power has reached the level of 63.7%.

Turkey’s discovery of 405 billion cubic meters of natural gas in the Black Sea was an important step towards energy independence, Erdogan added, saying the country aims to add nuclear energy, which makes zero carbon emissions and is environmentally harmless, to the country’s energy production.

He stressed that nuclear energy has a special role in Turkey’s energy policy and the country will become among those with nuclear power in 2023, the centennial year of its foundation.

For his part, Putin praised the joint efforts of the two countries that made it possible to continue the construction of the plant as planned despite the coronavirus pandemic.

“I would like to thank all participants in the construction of the Akkuyu nuclear power plant and once again express my confidence that the successful implementation of this flagship project, without exaggeration, will not only bring the bilateral cooperation in the energy sector to a qualitatively new level but also contribute to the further promotion of the multifaceted Russian-Turkish partnership, promote friendship and mutual understanding between the peoples of our countries,” Putin said.

He stressed that Russia attaches great importance to the Akkuyu project and promised to continue providing all necessary assistance and support.

The start of operations for the plant’s first unit is planned for 2023 when the country will celebrate the centennial anniversary of the republic. The remaining three units are due to start operations by the end of 2026, at a rate of one per year.

An intergovernmental agreement for the Akkuyu NPP, which is currently under construction, was signed between Turkey and Russia in May 2010.