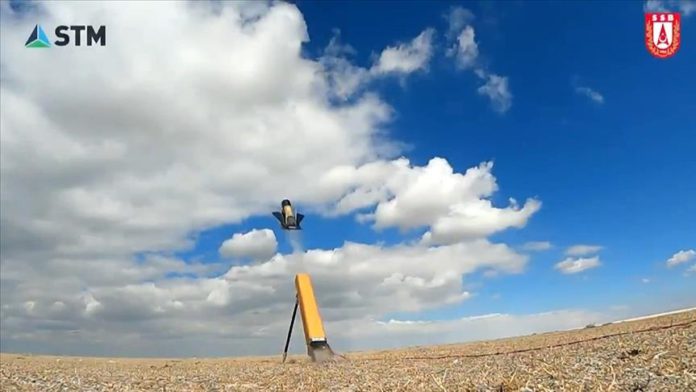 “Able to operate effectively day and night by a single soldier, Alpagu hit its target with full accuracy in the test firing carried out at the Aksaray Shooting Range,” according to a statement by Turkey’s Defense Industries Authority. “After launching, Alpagu, which flew for about 10 minutes, followed the target through image tracking software. Undetected until the last moment, Alpagu destroyed its target with the ammunition on it.”

Alpagu is distinguished by its lightweight structure, diving speed, low radar cross-section and its ability to do pinpoint damage to high-value, important targets.

It weighs less than 2 kilograms (4.5 pounds) and is one of the few such UAVs in the world.

Despite its small size and light weight, Alpagu carries enough explosives to neutralize targets, can work at very long distances and can be easily transported and used by a single soldier.

It also provides an important surprise effect and operational superiority with its artificial intelligence and image-processing capabilities, silence and ability to bring explosives it carries to the target.

In addition to its superior capabilities, Alpagu is set apart from competitors with features such as the ability to be used as a herd and integration with various platforms.

It has versions that can be launched from multiple launchers over armored vehicles.

There are versions of Alpagu that can be launched from armed unmanned aerial platforms, as well.

After STM developed a small-size platform under 2 kilograms, larger platforms will soon be ready for use.

After work on larger versions of Alpagu, platforms that can engage more than 10 kilograms and bigger targets will be produced.

Following deliveries starting this year, STM aims to create an Alpagu product family with products that will be diversified beginning next year.

Taiwan records hottest May in over 7 decades