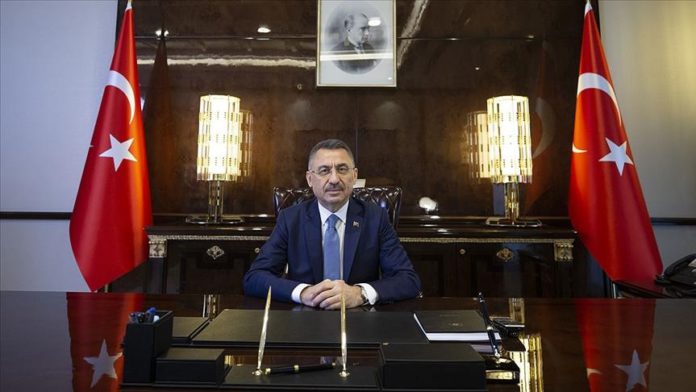 Turkey’s steps to support the economy from the coronavirus fallout reached 562 billion Turkish liras ($71.6 billion) as of November, said the vice president on Monday.

Presenting the 2021 budget to parliament for debate, Fuat Oktay said the government expects employment to rise by approximately 1.6 million people and the unemployment rate to fall to 12.9%.

He added: “One of our main goals is to permanently reduce inflation to low and single digits, with the implementation of policies which have been developed as a result of wide-ranging consultations with various sectors of society and the policies envisaged in the New Economic Program.”

The government program was announced this September.

He added that the main aim of Turkey’s 2021 budget is to provide stable and predictable steps for the progress of Turkey’s economy in the global restructuring due to the COVID-19 pandemic.

On efforts to develop vaccines for the virus, Oktay said Turkey’s government supported the domestic production of drugs to treat COVID-19 and that local coronavirus vaccine studies reached the stage of human trials.

On the massive Istanbul Airport, which was inaugurated in October 2018, he also underlined that due to the outbreak, “the number of international and domestic flights fell both in Turkey as worldwide in 2020, so a guaranteed payment [for Istanbul Airport] that is far below the average annual rental value will be put on the agenda.”

Oktay also said that violence against healthcare professionals is absolutely unacceptable, adding that Turkey will take necessary additional measures to protect them in the days to come.

On the recently ended conflict in Upper Karabakh, and a controversial move by the French parliament, Oktay criticized French attempts to “illegally” hand over the region to Armenian occupation.

France’s National Assembly last week approved a resolution calling on the government to recognize Nagorno-Karabakh as a “republic,” following similar symbolic action by the Senate.

Relations between the former Soviet republics of Azerbaijan and Armenia have been tense since 1991 when the Armenian military illegally occupied Nagorno-Karabakh, also known as Upper Karabakh, a territory recognized as part of Azerbaijan, and seven adjacent regions.

On Nov. 10 the two countries signed a Russian-brokered agreement to end fighting and work toward a comprehensive resolution.