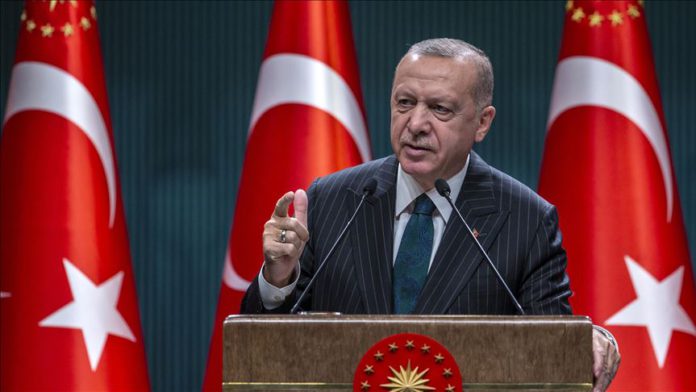 Last week’s discovery of natural gas reserves in the Black Sea is a prelude to upcoming good news from the Mediterranean, said Turkey’s president on Monday.

There is substantial evidence that the natural gas discovery foreshadows a much bigger gas find, and hopefully the good news will continue, Recep Tayyip Erdogan said after a Cabinet meeting at the presidential complex.

Erdogan also called Monday’s Greek Navtex alert a “spoiled act” that endangers the coastal and navigational safety of all ships in the region.

Athens’ Navtex said its air and naval forces would hold joint exercises in an area overlapping with the one Turkey declared on Sunday.

From now on, Greece will be responsible for all conflicts in the region, and will be at a disadvantage, added Erdogan.

The Turkish ship Oruc Reis and the vessels accompanying it will not retreat from their activities in the region, he said.

The kind of mentality which sides with terrorist groups instead of supporting democratic countries has come into US politics, said Erdogan, in reference to Turkey’s fight against YPG/PKK terrorists.

In its more than 30-year terror campaign against Turkey, the PKK – listed as a terrorist organization by Turkey, the US and the European Union – has been responsible for the deaths of nearly 40,000 people, including women, children, and infants. The YPG is the PKK’s terrorist Syrian branch.

Despite the YPG’s terrorist status, the US has supported it as a supposed ally against Daesh/ISIS in northern Syria.

“A mentality which looks the other way when our country is being attacked by terrorists and hopes to see the results when we face a coup is a stain on the name of democracy,” Erdogan said, referring to recently controversial remarks by US Democratic Party presidential nominee Joe Biden.

In a video clip that went viral, Biden said: “We can support those elements of the Turkish leadership that still exist and get more from them and embolden them to be able to take on and defeat Erdogan. Not by a coup, not by a coup, but by the electoral process.”