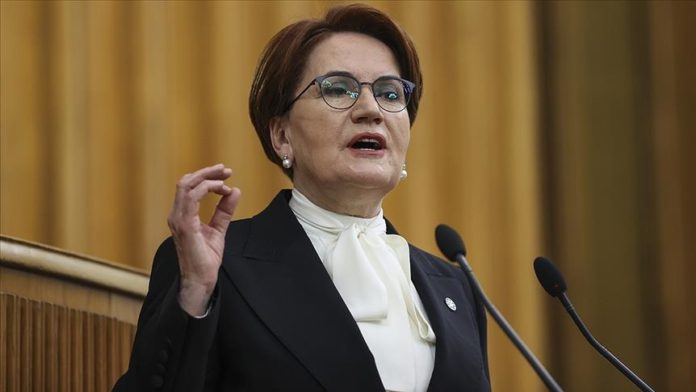 A Turkish opposition party leader on Wednesday said that on the matter of parliamentary deputies accused of terrorist ties, the IYI (Good) Party would pursue justice within the law.

Vowing to examine summaries of proceedings for 33 Peoples’ Democratic Party (HDP) lawmakers in detail, Meral Aksener said: “The IYI Party looks at the summaries prepared by the Turkish judiciary and it does whatever is necessary. Nobody should doubt this.”

“For instance, the IYI Party will never set up a table or negotiate with terrorists. The IYI Party pursues justice within the law,” she said.

“For example, the IYI Party will not raise a blind [voting] hand to the summaries of proceedings, which are brought [to parliament], so that the problems of the nation are not discussed,” she added.

Nationalist Movement Party (MHP) leader Devlet Bahceli repeatedly called for lifting the immunity of some HDP lawmakers, as well as for the party’s closure.

Turkey’s government has said the HDP has links with the PKK, which is listed as a terrorist group by Turkey, the US, and the EU.

In its more than 35-year terror campaign against Turkey, the PKK has been responsible for the deaths of 40,000 people, including women, children, and infants.

December 24, 2020
We use cookies to ensure that we give you the best experience on our website. If you continue to use this site we will assume that you are happy with it.Ok